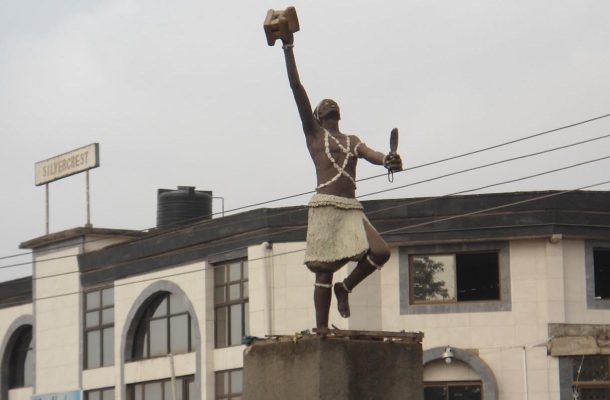 At the mention of Okomfo Anokye’s name, the common miracle that comes to mind to most people is the chanting of a golden stool from the heavens and the burying of a sword that nobody has been able to draw out till date.


But the greatest Okomfo (fetish priest) that ever lived on this land did more miracles than what most people are aware of and here are a few more you probably didn’t know.


Right in front of a big crowd, Komfo Anokye cooked a plantain, planted it and it immediately germinated, grew, ripened and was harvested.


2. He once commanded rain to stop during a festival


As a boy, he and his parents went to the farm and when it was dark, it began to rain, he disappeared into the forest and came back with some leaves and asked his parents to put the leaves in their armpits and asked them to close their eyes. When they opened it, they were back home. Talk about teleportation and that’s one right there.

4. Drained water out of a stream


He drained the Agyempansu stream in Kumasi, brought it back and named it Suben, which is still flowing till date.


Okomfo Anokye once poured the dregs of palm-wine on to the ground and immediately there grew an oil-palm tree. It is alleged that the oil-palm tree stands now near the main street at Awukugua by his shrine “Obuabeduru“. It is harvested yearly and the fruit distributed to the seven Stool holders, known as Adadifo, and the Chief of the town.  He then used his own wooden sandals (Nkronnua) to climb up that oil-palm tree and left some imprints of his feet on the trunk. These are still visible on the tree at Awukugua.


He moulded an Ɔware game board out of a stone with his bare hands, which can still be seen at Awukugua.


7. He could walk through rain without getting wet.


It is alleged that on ceremonial days, if the people of Awukugua were short of palm-wine, Okomfo Anokye would climb up that oil-palm tree by the street with his wooden sandals on, and would bend a branch and use it as a pipe through which the palm-wine would flow, and people would collect it beneath the tree.


In a sacred place called Ayete at Awukugua, Okomfo Anokye used to perform some mysterious rites in connection with a very big rock. He would perform an invocation and go into a trance until water came out of the rock. The water was used for cooking the nuts of the palm tree at the place of the seven Adadifo. If the water failed to come then it was a bad omen, and Awukugua should be purified.

10. He could dash a raw egg against a rock and it won’t break

Edwin 1 year ago
Cool keep it up