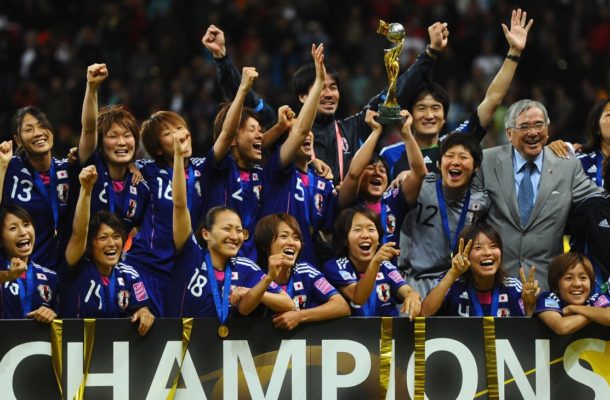 
Japan, Australia, China PR, Thailand and Korea Republic are the nations to have survived the qualification tightrope, earning the chance to emulate Asia's heroes from tournaments past.

With 100 days until the opening of France 2019, the-AFC.com celebrates the Continent's proud history at the biggest event of the women's game, by reliving some of Asia's brightest days at the FIFA Women's World Cup.

China PR came into the first ever FIFA Women's World Cup as hosts, and as the dominant team in Asia - having won their third AFC Women's Asian Cup from as many attempts earlier in the year - they wasted no time in stamping their authority on the first ever official global championship.

With 65,000 fans packed into Guangzhou's Tianhe Stadium, Ma Li scored the first ever World Cup goal to make it 1-0 at half time, before a brace from Liu Ailing and a fourth from Sun Qingmei came in the second 40-minute period, as the host ripped the European Championship runners-up to shreds.

Despite their dream start, the Steel Roses were eliminated at the quarter-final stage in 1991, while Norway made it all the way to the final where they lost 2-1 to the United States.

By the time the third FIFA Women's World Cup was held in the United States in 1999, China PR had won six of an eventual seven AFC Women's Asian Cup titles in a row, and it was there that they became the first Asian nation to reach a senior World Cup Final.

Powered by seven goals from Golden Ball winner Sun Wen, China scored 19 times in five successive wins on the way to the final, where they lost on penalties after a 0-0 draw with the hosts in front of a staggering 90,000 fans; a number which has never been topped.

The 1999 final lives in the memory as a pivotal moment in the history of women's game, and China's 5-0 semi-final demolition of Norway, who won Olympic gold the following year, stands as one of the great performances on the world stage in Asian football history.

With just three wins in their 17 previous World Cup matches, and no Women's Asian Cup title to their name prior to the tournament, Japan completed the stunning achievement of becoming Asia's first ever senior world champions.

Led by the outstanding Homare Sawa - who scored six goals and won the Golden Ball as the tournament's best player - the Nadeshiko eliminated hosts and two-time defending champions Germany in the last eight, and outclassed European powerhouse Sweden in the semi-final.

They then prevailed on penalties to defeat the United States after a 2-2 draw in the final, with Sawa scoring in the 117th-minute to force the shootout, and 20-year-old future star Saki Kumagai converting the final spot-kick to win it.

The win signaled the beginning of a golden era under head coach Norio Sasaki, which included a first Asian title in 2014, and a return to the global final four years later.

An expanded field of 24 teams meant, for the first time, Asia had five representatives at the FIFA Women's World Cup, and they all did the Continent proud in Canada.

Of Asia's five teams, all won at least one match, four advanced to the knockout stage, three reached the last eight, and - for the second time in a row - Japan made it all the way to the final, although this time they were beaten by the United States.

Australia's 1-0 Round of 16 win against Brazil was their first ever in the tournament's knockout stage, helping the Matildas to a third successive quarter-final, while China PR also returned to the final eight.

Not to be outdone, Korea Republic and Thailand earned their first ever World Cup wins, against Spain and Cote d'Ivoire respectively, with the Koreans also advancing beyond the group stage for the first time, underlining the Continent's status as a global women's football power.