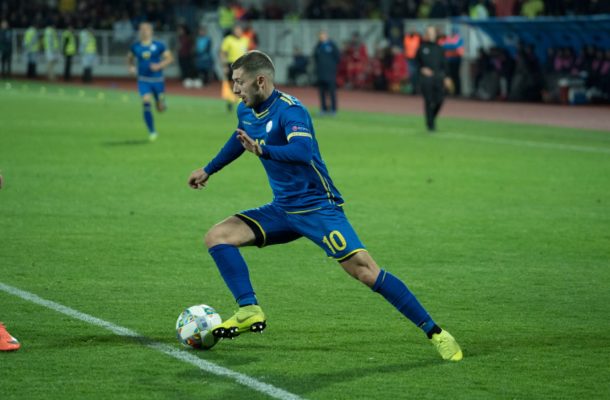 Zeneli, Kosovo coming of age together

Unconsciously paraphrasing Drake, Arber Zeneli puts Kosovo’s achievements into stark focus. “It all started from the bottom.” And now they’re here, celebrating an unbeaten and pivotal 2018.

It’s less than three years since the Balkan nation became FIFA’s 210th member and, having triumphed in the UEFA Nations League by topping their League D group, they look to be on an upward trajectory which shows little sign of abating.

“It’s been a fantastic year for us as a new country. We never thought we’d go the year undefeated with the games we’ve been playing,” Zeneli, their blossoming winger who is currently dazzling in the colours of Heerenveen in the Netherlands, explained to FIFA.com.

“The Nations League has been the highlight of course. We wanted to win the group and the last game was a fantastic result for us as a country.”

Hitting a sensational hat-trick in front of a delighted home support, the 23-year-old’s contribution to the 4-0 win showed exactly why the wide man is one of the most coveted players in the Eredivisie this season.


Only Feyenoord's Steven Berghuis has more assists then the right-footed winger who operates predominantly from the left, cutting inside and wreaking havoc. It's no surprise that Cristiano Ronaldo and Kaka are two of his idols.

And Zeneli’s own growth has mirrored that of his country, who are up to 131st in the FIFA/Coca-Cola World Ranking, having climbed 47 places since January. Born in Sweden and the oldest of three brothers, football “had a huge impact on the Zeneli family”. Working his way through the Swedish youth teams from the age of 15, Arber found himself torn when the land of his parents’ birth came calling – having been keen on him well before becoming a FIFA member.

“I didn’t really know what I wanted at that time, then after a while I just felt like it was the right decision,” Kosovo's country's current top scorer, with six goals, said. “I felt it in my heart and I went for it. Nothing so far has made me think I’ve made the wrong decision.”

Filled with pride whenever wearing blue and yellow, while his debut was a chastening 6-0 defeat by Croatia – though that FIFA World Cup™ qualifying loss “was a lesson that we needed” – Zeneli is undoubtedly joyful when considering their path so far.


“When we were accepted by FIFA, I wasn’t a refugee but my parents were and we just felt happiness, but also sadness too because we’ve been through a lot. You just want to play for all the people who have been through everything." "When you hear the national anthem for the first time and everybody stands there together and hears the anthem, it was a very big moment for us." “Getting the chance to play in World Cup qualification – of course we were in a very tough group – was a great experience, seeing us face those good teams.” “That was a very special moment for us, as the president of the Kosovo federation [Fadil Vokrri] passed away one month before. He was the one who made this happen. We’re forever going to be thankful to him.” “It was a crazy night. Azerbaijan were expected to go and get a victory to clinch first place but we went out with one plan and we did a perfect job."

Now all eyes are set on 2019 and testing themselves against some of the continent’s best with the road to UEFA EURO 2020 presenting their second qualifying campaign, with England and Czech Republic among those waiting. Having triumphed in November, they go into it with an insurance policy.

“We know we have this Nations League play-off place with us, but this doesn’t mean we’re going to be nonchalant in qualifying. Why not get our ticket there if we can!” Zeneli insisted. “I can’t see us going in half-hearted. We have nothing to lose. If it doesn’t work we have two games where we can repair it. It’s going to be very interesting next year.”

My first hat trick in my career, and it happened to be for my country. A moment I’ll never forget. The support was unbelievable❤️