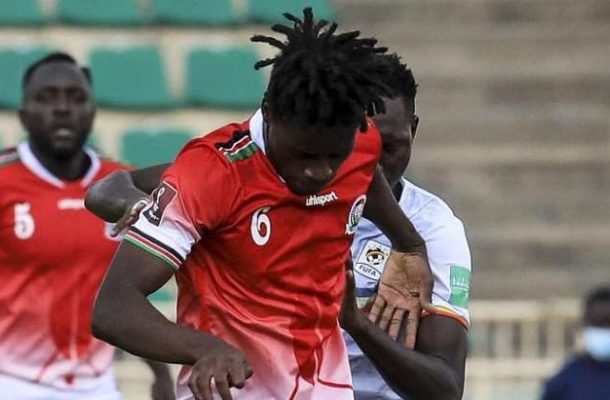 Kenya Togo and Niger all finished their 2022 World Cup qualifying campaigns with wins on Monday, with the trio playing for pride having failed to stay in contention for the African play-offs.

Kenya's 2-1 win over visiting Rwanda was the first of their Group E campaign and was earned against a backdrop of chaos in the running of football in Kenya.

Earlier on Monday, the president of Football Kenya Federation Nick Mwendwa was released from jail on bail pending further investigations.

On the pitch the Harambee Stars took the lead after just three minutes when Qatar-based striker Michael Olunga volleyed home from the edge of the six-yard box to net for the second World Cup qualifier in a row.

That lead was doubled 13 minutes later when 20-year-old Richard Odada, who plays in Slovenia, was on target from the penalty spot, following a foul on Erick Otieno by keeper Fiacre Ntwari.

Olivier Niyonzima pulled one back for Rwanda in the 66th minute but it was too little too late.

The result leaves Rwanda bottom of Group E with just a single point, while Kenya are third with six. Uganda finished on nine, with Mali topping the table on 15 and earning the place in the African World Cup play-offs.

In another dead rubber, Meme Placca scored the only goal of the game for Togo in the 88th minute as they beat Namibia 1-0.

The match was played at the Orlando Stadium in Johannesburg, South Africa because Namibia are one of the nations that does not have a venue suitable to host international matches.

The result means that Togo finished on eight points to claim second place in Group H, with Senegal having already topped the table and claimed the play-off place.

Niger completed their Group I games with a 7-2 thrashing of visitors Djibouti.

Victorien Adebayor scored twice for Niger in the first half either side of a goal from Youssouf Ahmed. After the break, there were two goals in two minutes from Amadou Wonkoye and then Daniel Sosah

Adebayor, who is currently on loan at Egyptian club Enppi from Danish side Koge, completed his hat-trick with 15 minutes left to play.

Siad Yabe Isman then pulled on back for Djibouti before two more quick-fire goals from substitute Issa Djibrilla extended Niger's lead once again.

The result means that Djibouti lost all six of their Group E game as they conceded 29 goals, scoring just four. Niger will be third in the table with seven points.

The group will be completed on Tuesday as Algeria host Burkina Faso to decide who will progress to the play-offs.

The match was played in the Moroccan city of Marrakech as Guinea-Bissau do not have a stadium that meets the requirements to host international matches.

On Tuesday Morocco, who have already won Group I and clinched a playoff berth, host Guinea.