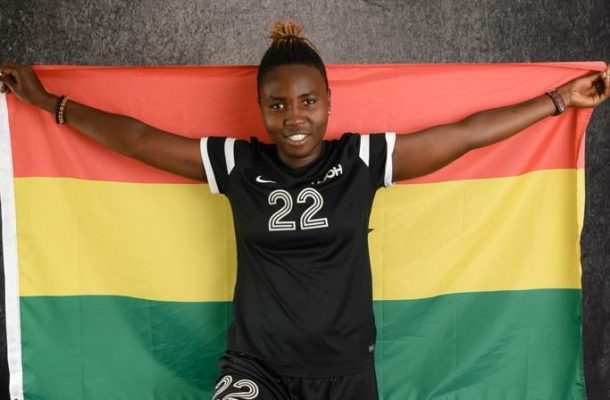 There is still hope for Women's Soccer in Ghana as the likes of Kate Adu Agyemang keeps dominating the Soccer World.

Her presence in every game as a striker and most of the time playing as a defender makes her fit for purpose on the field of play.

Adu Agyemang as affectionately called, hails from Atafoa-kumasi, in the Ashanti Region of Ghana.

Whilst at the University In USA, she played for the University of Northwestern, Ohio and won 4 trophies in three seasons. She captained the  team for two seasons at both the junior and senior years of the University. Kate led her team in the 2019 WHAC conference with 48 points and 12 assists and won the second best goal scorer with 18 goals in 2019 even as a defender.

In other countries, you could only get a player of her calibre from a football Academy. But Kate's talent is in-born, even with no Academy background, she has so many awards and trophies to her advantage for her teams while playing in USA.

Her prowess as a skillful female footballer, has also won her so many accolades which include but not limited to: Being recognized as All-Ohio honors by the Ohio Collegiate Soccer Association, Selected to the National Collegiate Athletic Association (NCAA) Division II team, National Association of Intercollegiate Athletics (NAIA) first eleven,  NCAA Division II/ NAIA All-academic team in 2019, Selected again as an NAIA all-America best eleven (2017, 2019), All-North Region best eleven by United Soccer Coaches,  Wolverine-Hoosier Athletic Conference's7 Defensive Player of the Year, First eleven for All-WHAC (2017,2018 and 2019), She was the National Best in the game winning goals.

One would have thought that football was only meant for the less brilliant students, but here comes Kate Adu Agyemang, though holds an Associate Degree in Paralegal/legal studies and a Bachelors Degree in Business Administration, from the University of Northwestern, Ohio, USA and yet plays soccer like a pro.