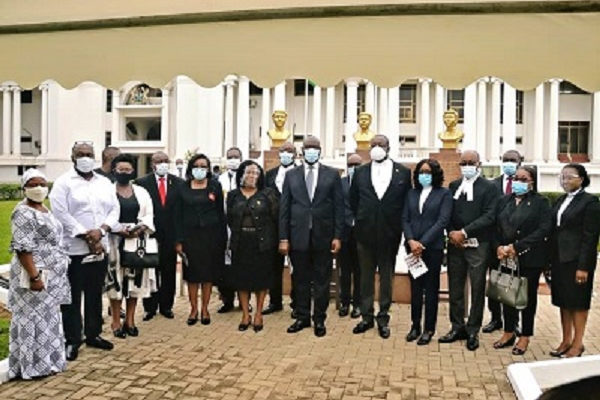 Chief Justice Yeboah(m) with GBA President, the Attorney-General and family members of the judges

As Ghana mourned three High Court judges, murdered 38 years ago yesterday, the President of the Ghana Bar Association, Mr Anthony Forson Jnr, has asked politicians to end the cycle of spreading fear in the build-up to the 2020 general elections.

Tension, anxiety and fear has become a common cycle every election, the lawyer observed but said those in the political space could stop this occurrence by spreading calm and bringing the people together.

He told the solemn church service attended by President Nana Addo Dankwa Akufo-Addo; the Chief Justice, Justice Kwasi Annin Yeboah; members of the Council of State, superior and lower court judges, as well as family members of the deceased judges that, the conduct of politicians must be geared towards peaceful and credible elections.

The church service was preceded by a wreath-laying ceremony at the forecourt of the Supreme Court.

Mr Forson who read on the topic, “Lest We Forget” urged the people to stand up for the rule of law and stand against oppression.

Also important for building strong institutions, promoting good governance and democracy, he said, was the need for reciprocity and respect between public servants and the people they serve.

The GBA boss underscored the need for Ghanaians to relive the expectations of their forebears who stood for peace, fairness and equity.

He said justice and righteousness were the core ingredients of development, noting that Ghanaians must reaffirm their commitment in those virtues particularly as the nation prepares for the December 7, 2020 elections.

Turning his attention to justice delivery, Most Rev Dr. Boafo said the judiciary must be seen to be upholding the truth and the rule of law at all times.

Already, he said Ghana was hard pressed on each side — rising political tensions, polarisation of society and the coronavirus pandemic.

It, thus, requires the concerted effort of every Ghanaian, he said, to help build a prosperous society.

The man of God said the courts were established to protect the rights and liberties of the people and that judges must work to ensure the people have full confidence in the courts.

He said God loved the righteous and does not need deeds except those that were rooted in justice, fairness and equality.

Most Rev. Dr Boafo noted that the three murdered High Court judges were martyrs because they stood for the rule of law and values they held sacred.

“These values still exist and those who preserved them deserved protection,” he said.

“The dastardly murder of the judges is something which should never happen in Ghana,” Most Rev Dr. Boafo cautioned, and said he was concerned about those who put the spirit of self-seeking before the public good.

Thirty-eight years ago, on Thursday, June 30, 1982, on the eve of the 22nd anniversary of Ghana’s Republic, the three judges; Mr Justice Fred Poku Sarkodee, Mrs Justice Cecilia Koranteng-Addow and Mr Justice Kwadwo Agyei Agyepong, all judges of the High Court and Major Acquah, a retired army officer, were brutally and savagely murdered on the night of their abduction at the Bundase Military Range in the Accra Plains.

The outcome of the investigation led to the prosecution and execution of Joachim Amartey Kwei, a member of the PNDC, Lance Corporals Samuel Amedeka and Michael Senya, and two ex-soldiers- Jonny Dzandu and Tony Tekpor.