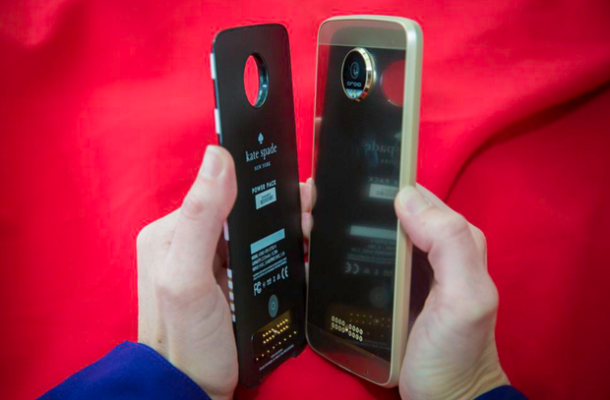 Almost every smartphone these days contains the same bag of tricks. Sure, one might have a bigger screen, more storage and other specs that help us tell one phone from another.

But on the whole, you’ll see the same sort of features again and again. Fortunately, there are some handsets out there that stand out from the crowd.

For instance, we dig how you can swap out the LG G5's bottom chin for other accessories (despite being a bit limited in its use cases), and Samsung's China-bound Hennessy and Galaxy Golden flip phone/smartphone hybrids are definitely unusual. In no particular order, we list some other handsets that have us looking twice thanks to their utter uniqueness.


The Moto Z (and its U.S.-only, Verizon-only Z Force counterpart) is a thin and fast handset. But it’s the array of magnetic pins on the back the makes it unique. With it, users can snap on different modular accessories, like a power pack or a portable speaker, to change up how the phone functions.


Aside from its tough exterior, which allows it to survive six-feet drops and dunks underwater, the S60 has a thermal imaging camera. Located above the phone’s rear camera, this enables users to visualize the temperature of objects. There’s also an app that offers different filters and tools related to thermal imaging.


Phones with projectors attached to them isn’t exactly new -- we saw it before with the Samsung Galaxy Beam, and the aforementioned Moto Z works with a projector accessory. But to see it on a 7-inch, big-screen Windowsdevice is quite different, which is exactly what the Holofone is. It can project images as big as 16 feet diagonal and up to 30 feet away, which comes in handy for an impromptu movie night


It’s not uncommon for phone manufacturers to copy designs from Apple’s iPhone, but Gionee went a step further and lifted the company’s 3D Touch as well. Originally known as Force Touch when it was introduced in the Apple Watch, you can use 3D Touch in the iPhone 6S, 6S Plus and now -- the S8. Though the S8 isn’t an Apple phone, users can still call up different menus items by tapping harder on its pressure-sensitive display. Read the full hands-on here.


Competitively priced with loud speakers and a 16-megapixel camera, the Idol 4S also has one more trick up its sleeve. The device comes with a software goodie that lets you use the OS upside-down as well as right-side up, so you can navigate through the interface whichever way you hold it.