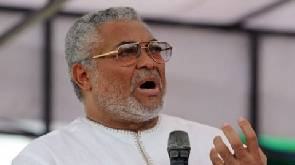 Former President Jerry Rawlings who is founder of the governing NDC has arrived at the Cape Coast stadium in the Central region where the party is launching its campaign for the 2016 polls.

He entered the field to a cheering and enthusiastic crowd.

President John Mahama and his Vice Kwesi Amissah-Arthur are expected to arrive anytime soon for the event to officially kickstart.

Meanwhile, Communications minister Dr. Edward Omane Boamah has said the President will win the elections because he is humble.

“Ghanaians will vote for John Mahama because he is humble and it is that kind of leadership Ghana needs. Ghanaians want people who love peace and the President has shown over the years that he is peace-loving and brings everyone on board,” he told Nana Aba Anamoah at the Cape Coast Stadium, where the party is launching its campaign.