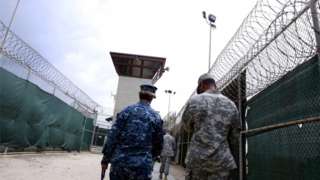 The US says it has sent 15 Guantanamo Bay detainees to the United Arab Emirates - the largest single transfer during President Barack Obama's administration.
The Pentagon says the transfer of 12 Yemeni nationals and three Afghans brings the total number of prisoners down to 61 at the US facility in Cuba.

Most of inmates have been held without charge or trial for more than a decade.

President Obama wants to close the prison before he leaves office.

The White House also wants to transfer the remainder to the US - but Congress is opposed.

In a statement on Monday, the Pentagon said: "The United States is grateful to the government of the United Arab Emirates for its humanitarian gesture and willingness to support ongoing US efforts to close the Guantanamo Bay detention facility."

In April, nine Yemeni prisoners were sent to Saudi Arabia.

The Guantanamo Bay prison is located on an American naval base in south-eastern Cuba.

Former US President George W Bush opened it to accommodate foreign terror suspects after the 11 September attacks in 2001 on the US.

In February the White House presented a plan to Congress to close the camp.