Infrastructural development under me 'unprecedented' – Mahama 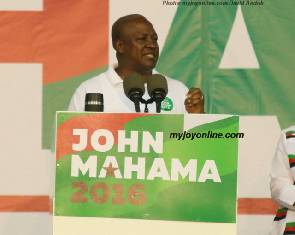 The amount of infrastructural development undertaken by the current government is “unprecedented”, President John Mahama has said.

On the first day of his four-day campaign tour of the Western Region, Mr Mahama told a crowd of supporters that the governing National Democratic Congress (NDC) had engendered “massive” infrastructural development in the following five sectors: water, power, education, healthcare, and roads.

Mr Mahama, who is seeking re-election in the December polls, said since he assumed office as president in 2013, his government made sure that it paid attention to those five sectors.

Mr Mahama’s Western regional tour started after the party launched its campaign in Cape Coast in the Central Region on Sunday.

During the launch, Mr Mahama lunged at the NDC’s main opponent, New Patriotic Party (NPP), describing it as a party in disarray. “Developments in the largest opposition party threaten the democratic health of our country. It is said that the nature of an organisation is founded on its leadership. The largest opposition party has prided itself as the apostle of democracy and this has metamorphosed in recent times into a very intolerant organisation.

“Those who can hurl the most verbal abuses are the most respected and hailed in that party. They are patted on the back by the leadership for doing a good job.

“The soul of the party has been captured by the hawkish and intolerant fringe and this group has cowed the moderates and other level-headed members of the party into silence. Anyone who raises his or her voice against the current leadership of the party is promptly set upon in the media and on other platforms. And even the former president, on whose record the party is running, has not been spared his share of these insults.

“The verbal abuse has led to a culture of silence in the party and even though the emperor is wearing no clothes, everybody is afraid to tell him so. The party has become intolerant of dissenting opinion and those who have spoken out have been promptly dealt with, removed from office, and threatened with physical harm.”