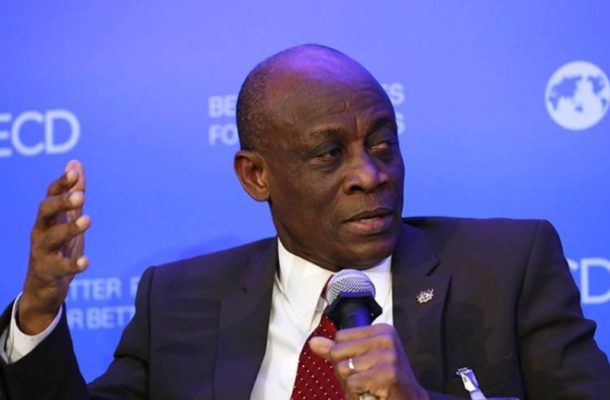 The Minister of Finance, Mr Seth Terkper, has expressed satisfaction at the pricing of Ghana’s fifth Eurobond at 9.25 per cent in London on Thursday to raise US$750 million from international investors with appetite for emerging economies’ sovereign debt instruments.Mr Terkper said both the issue and the processes that led to its success were satisfactory, noting that “Ghana’s turnaround story had significantly improved investor confidence.”“This has enabled the country to borrow on more reasonable terms compared to other recent transactions, including the 2015 bond that was issued with a World Bank guarantee,” he said.Ghana last issued Eurobond at 10.75 coupon (yield) rate for US$1 billion, even with guarantee from the World Bank and its International Development Association (IDA).The coupon rate and high interest clearly give credence to the government’s decision not to issue the note last month.According to the Ministry of Finance, the bond was oversubscribed, with orders exceeding US$4 billion compared to a target issuance size of US$750 million, with interests coming from investors in the United Kingdom, Europe, the United States, Middle East and Asia.The outturn represents an oversubscription of more than five times indicating the high appetite for Ghana’s credit.“The bond is a back-end amortising maturity with a weighted average tenor of 5 years. The principal will be expected to be repaid in three instalments of US$250 million in September 2020, September 2021 and September 2022,” a statement from the ministry of finance said.It added the Notes would be listed on the Irish and Ghana Stock Exchanges.Market conditionsGhana went on a road show last month with a team led by Mr Seth Terkper, Minister for Finance and Mr Millison Narh, the Deputy Governor of the Bank of Ghana, which interacted with investors in London, Boston and New York.Due to unfavourable market conditions, a decision was taken not to price a transaction immediately after the road show and to continue to monitor the markets, as Ghana last bond at the time was trading closer at 10.4 per cent.Since then the market has trended favourably, making it attractive for Ghana to price a transaction, with the Ghana 23’s trading at 9.33 per cent prior to the current announcement.Debt management policyThe government, as part of the new debt management strategy, has implemented a “buy-back” of US$100 million of Ghana’s first Eurobond, codenamed ‘Ghana 2017’, using the recently established sinking fund for retiring sovereign bonds.Up to US$400 million of proceeds from the new issue would be used to retire Ghana 2017. A total of US$250 million from an earlier Eurobond was used to buy-back Ghana 2017, issued in September 2007.While thanking the investor community for their interest and support for the Ghanaian economy, Mr Terkper stressed that the outturn was a vindication of the decision taken not to issue the bond last month.Source: Daily Graphic