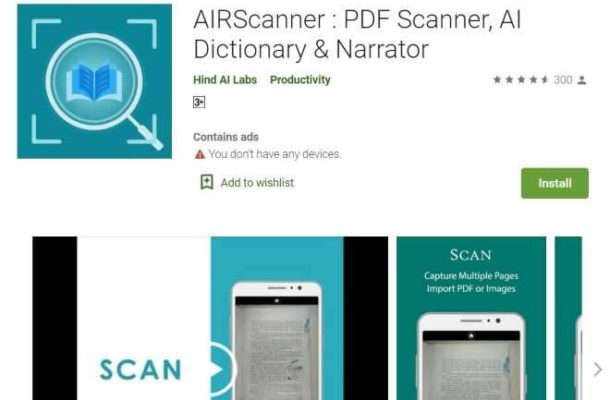 Aatmanirbhar Bharat: IIT Bombay students launch apps after clarion call for self-reliance! A few months ago, India placed a ban on several Chinese apps and called for boosting localisation of services. Since then, several people have stepped up to give a boost to indigenisation. The latest in this slew of domestication of services are two final-year B.Tech students from the Indian Institute of Technology, Bombay (IIT Bombay). The two students are pursuing Civil Engineering and have launched an app called AIR Scanner, which is a free-of-cost mobile application for scanning of documents. The students’ initiative was shared by the Union Ministry of Education in a statement.
The app is an alternative to popular Chinese app CamScanner, which was also among the apps to be banned by the Union Government. Developed by Kavin Agrawal and Rohit Kumar Chaudhary, the app provides the facility of scanning documents and reading assistance using Artificial Intelligence (AI). The app was launched on August 15, and apart from scanning the documents, it can also read aloud for users who have difficulty in reading English.

Chaudhary said that early, the duo was only developing an app that would make the reading experience of users easier. However, it was around that time that the apps were banned, and when the duo surveyed and found out that the ban on CamScanner was making it difficult for people to scan documents on the go, they decided to add the scanning feature to the AIR app itself. The app is unique due to its exclusive safety features.
Rohit said that the documents that are scanned using the app are saved on the device itself, and they are not using any cloud storage. This means that the app does not collect any user data. Moreover, the app is completely free of cost. Rohit added that several apps require users to sign in to use the app, and as soon as the sign in is completed, all the personal information and document data is automatically backed up in cloud storage, which leads to security issues. The app the duo has developed does not even require the users to sign in, he said.
Through the app, users can scan their documents, organise them as well as share them.
As for the AI reading feature, the app not only reads out the documents to users, but also provides the users with the meaning of any selected word in as many as 40 languages.
The app has been developed with the aim to help people in their education, Rohit said, adding that while the app is currently available only in English, soon, they would include more languages as well. They are also planning to convert this app, which has around 1,500 downloads so far, into a start-up. AIR Scanner is available only on Android presently, but an iOS version will also be launched soon.