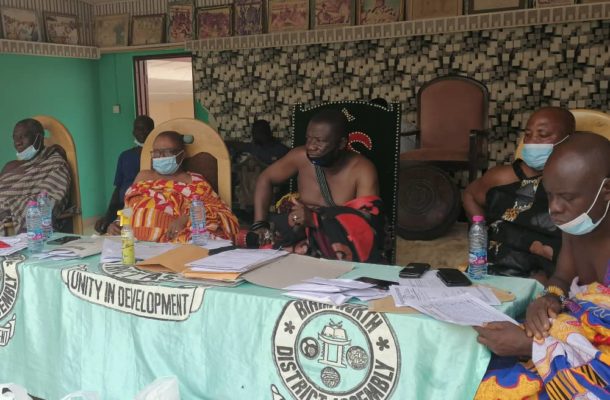 The Chiefs of the Abirim Traditional Council and the ruling New Patriotic Party Constituency Executives of the area in the Eastern Region are up in arm against the District chief executive officer of the area, Raymond Nana Damptey.

According to the chiefs, the DCE is incompetent, disrespectful, and has failed to also collaborate with them to develop the District so he does not deserve to be reappointed for the second.

The Abiremhene, Obrempong Akwasi Amo Kyeretwe I, made these known when the party executives of 11 out of 16 members led by the Constituency Chairman, Patrick Banor, Secretary, Assistant Secretary, Deputy Organizer, Youth Organizer, Deputy Youth Organizer, Treasurer, Financial Secretary, Communication Officer, Nasara Coordinator, and Deputy Nasara Coordinator on Tuesday stormed his Palace during a meeting to file a petition which has been already been sent to the Presidency against a renomination bid by Remond Nana Damptey as Birim North District Chief Executive (DCE).

After the petition was filed, the chiefs led by the Abiremhene Obrempong Akwasi Amo Kyeretwe 1 voted on it, whereby out of the 42 votes, 37 voted No, which means they don't want the DCE again, 4 members Voted Yes as 1 was rejected.

The chief said, they cant work with the DCE again, hence appealing to the President to reappoint a different person who can work with the chiefs to develop the District.

The Party members in petitioned said the DCE, Raymond Nana Damptey, under his leadership there was a total disconnect between the Birim North District Assembly and the party, which the constituency leadership had to struggle to get information on happenings in the District to promote the activities of the party.

According to them, the DCE is not in touch with the party’s grassroots on the basis that the DCE spent most of his weekends outside the constituency and did not make time to attend functions of our party faithful-funerals, weddings, naming ceremonies, polling station meetings, etc.

The Party members narrated that, the DCE did not take an active part in the just-ended elections, also sabotaging party faithful who toiled for the party to win power in the last elections.

They claimed that he went behind the constituency executives to purchase a piece of land that was designated for our party office, adding that he was in our executive meeting when a decision was reached that a particular plot of land should be acquired for the party to build its office complex.

‘’Unfortunately, the DCE clandestinely bought that piece of land for his personal /private use and have gone ahead to build his house on the said land. It took our current Constituency Chairman (Mr. Baffour Bannor Barimah Bannor) to purchase 2Plots of land in the amount of (GH. 50,000.00 cedis) fifty thousand Ghana Cedis for the construction of the party office’’ the petition stated.

The Petition further stated that Mr. Raymond Damptey does not only run a parallel administration with the party and the District Assembly but also treats the party as a second fiddle in his work.

Among other accusations filed against the DCE, they said the DCE has adopted divide and rule tactics that has brought disunity among the Constituency Executives.

They again neglected the party including the Electoral Area Coordinators, Polling Station Executives, and the party grassroots that toiled in opposition and brought the party to power in the 2016 general elections’’ party of the Petition read.

The Party noted that these and many other reasons are what they believe must render the DCE Raymond Nana Dampety ineligible for reappointment to pave way for a grass root person who believes in shaping and bringing people together to make our party solid and strong for victory 2024.

Meanwhile, attempts to speak to the DCE at press time proved futile as he failed to pick all calls sent to his phone.