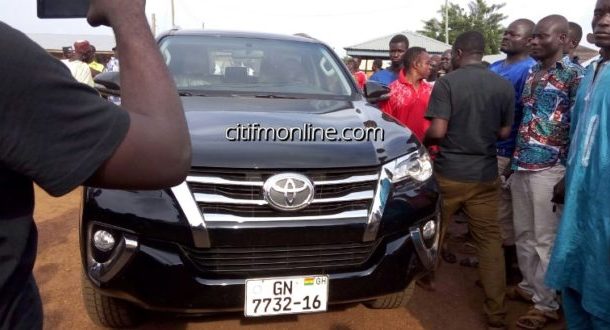 The Brand new Toyota Fortuner V8 with registration GN 7732-16 has been delivered to the Abudus Regent. The gift is in fulfilment of President Mahama’s promise to give the Boling-Lana a ride to facilitate his movement.

Deputy Secretary to the Abudu Royals in Dagbon, Abdullah Abubakari Sadique at a news conference in Yendi on behalf of the Boling-Lana showed appreciation for the honour. He said the Abudu Royals remained committed to sustaining the peaceful coexistence in Dagbon.

Abdullah Abubakari Sadique however renewed calls on government to fulfil its promise to perform the final funeral rites of the late two overlords of Dagbon, Yaa-Naa Mahamadu Abdulai IV and that of Yaa-Naa Yakubu Andani II.

He said the continuous delay in performing the final funeral rites of the late Yaa-Naa Mahamadu Abdulai IV remained a thorn in the flesh of the Abudu royals. He thereby emphasized the need for government to fully implement the road map needed for the restoration of unity and reconciliation in Dagbon. The news conference according to Abdullah Abubakari Sadique was called to debunk a Metro TV reportage that some Abudu chiefs pressurized the Boling Lana to return the gift. He described the report as a figment of somebody’s imagination and urged the media to treat it with the contempt that it deserves.