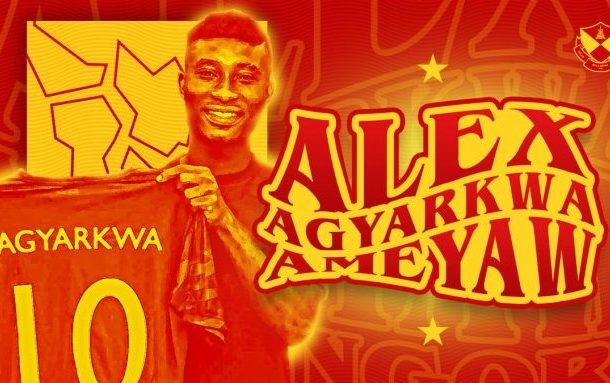 The player will join the Malaysian giants on an initial six months deal with an option to make the deal permanent.

He has been impressive in the club's challenge for Premier League promotion with eight man of the match awards in seventeen matches.

“The 20 -year -old Ghanian comes as a player on loan for half a season from Accra Lions club, which is also the original club of Jordan Ayimbila (Selangor FC) and George Attram (Selangor FC 2).

For the record, Alex Agyarkwa is one of the key players of the Accra Lions team and has been named the ‘Man of The Match’ for 8 out of 13 games over the half of the 2021 season.

According to Michael Feichtenbeiner, Sports Director of Selangor FC, the 172cm tall player who plays in the Ghana League division two will fill the middle line of the Selangor FC 2 team with the potential he has.

“After seeing the best performances by Jordan Ayimbila and George Attram as well as the good relationship with the Accra Lions club, I have discussed with the owner of the club and he agreed to loan Alex Agyarkwa Selangor FC 2 import player.”

“Alex has shown excellent performances and has often been the Man of The Match in the matches he has participated in. He is also a player who has the range of individual skills needed in the team.”

“Besides that, he is also a flexible midfielder because he can play in the number 8, 10, and 6 position well. He also has a dominant left foot and is able to make accurate passes to the striker, besides having good dribbling skills. This will give us an edge in the pattern of play we use now,” explained Michael.

“I put him at Selangor FC 2 to help him adapt to the DNA of Selangor FC like Jordan Ayimbila and George Attram. This move is necessary to prepare Alex for bigger tasks and challenges at this club.”

However, Alex will only arrive in Malaysia next week and will undergo quarantine for 14 days before being allowed to participate in the Selangor FC 2 team’s training in early July.