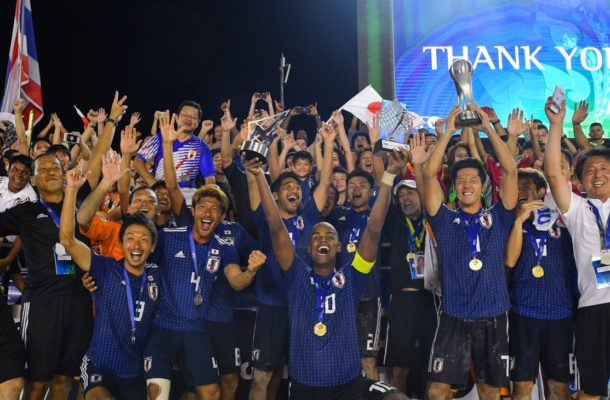 Along with Japan and UAE, Oman sealed their spot as Asia’s three representatives in the 2019 FIFA Beach Soccer World Cup which will take place in Paraguay in November this year. Oman, who will feature on the world stage for the third occasion, defeated Palestine 2-1 on penalties following a 2-2 draw in the third-place play-off just hours before Sunday’s final, just as UK gambling sites predicted.

The AFC President said: “On behalf of the Asian football family, I would like to congratulate Japan for their performance and consistency in Thailand. We must also praise UAE who displayed great skill in what was a thrilling final.

“Asia has a proud history on the world stage in beach soccer with Islamic Republic of Iran claiming third place in the last edition of the FIFA Beach Soccer World Cup in the Bahamas and I am confident Japan, UAE and Oman will continue our remarkable legacy in Paraguay and build on the undeniable rise of the sport.”

The AFC President also praised the efforts of hosts Pattaya, the Local Organising Committee and the Football Association of Thailand as well as the competing AFC Member Associations for their role in growing the sport across the Continent.

Shaikh Salman added: “We had 15 teams in the 2019 competition, a notable increase from the 12 competitors from the previous edition, which further underlines the success of our Vision and Mission to provide more opportunities for Asia’s teams and players to compete in top level competitions.

“I must express the appreciation to the LOC in Pattaya of the entire Asian football family, the FA Thailand and the Local Government for staging an exceptional tournament and also to our Member Associations for their unity in expanding the reach of beach soccer.

“The commendable performances from emerging teams such as Palestine, Malaysia and Afghanistan are testimony to the increasingly competitive nature and continued progress of the sport in Asia.”

In the individual awards, Japan team captain Ozu Moreira (pictured above) was rewarded for a stunning campaign, winning both of the competition's major individual awards. The 33-year-old was voted the tournament's Most Valuable Player, while his nine goal-haul in Japan's six matches also saw the towering star claim the Top Goal Scorer Award, one ahead of teammate Shusei Yamauchi.