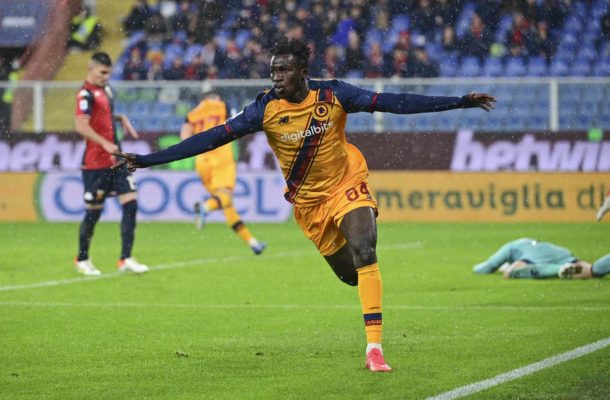 Talented Ghanaian youngster Felix Afena-Gyan has gone into the annals of history at AS Roma as he becomes the 19th youngest ever player to score for the Giallorossi.

Ghanaian youngster Felix Afena-Gyan was the hero for AS Roma as he rescued his side from an embarrassing draw against Genoa on Sunday night.

However, with less than 10 minutes remaining, a devastating Roma counterattack was slotted home by teenage substitute Felix Afena-Gyan, as he scored his maiden senior goal with an excellent first time shot.

The Ghanaian capped his memorable evening in stoppage time as he curled a wonderful strike into the top corner.

He joined the Italian Serie A side in March this year straight from senior high school football and went into their primavera side where he shone before being handed the chance in the first team.

His brace against Genoa makes him the youngest player in the club’s history to hit a brace for AS Roma in 94-years (18 years and 306 days).

Afena-Gyan has also become the 19th youngest to find the net in the club’s history with Amedeo Amadei holding the record (15 years and 287 days).