Afoko must confess before re-admission into NPP - Mike Ocquaye 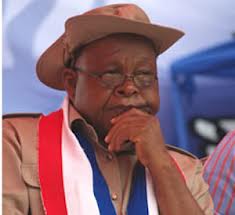 The New Patriotic Party (NPP) has said the only way it would revoke the suspension of its National Chairman, Paul Afoko, is when he confesses his sins and asks for forgiveness.
Head of NPP’s Constitutional Committee, Professor Mike Ocquaye, said the conventional way of re-admitting persons who have been suspended in any organisation on grounds of misdemeanor would be when the person has shown remorse for his misdeeds.

“In this world, you must be flexible. When you go to confession it is what you say in Latin that is valued. He must show remorse and go for confession before he will be readmitted into the party,” Prof Ocquaye told Dzifa Bampoh, host of Joy FM’s Top Story programme, Monday.

For nine months, Mr Afoko has been in court challenging a suspension handed down to him by the NPP’s Disciplinary Committee for alleged misconduct.

He said his suspension was unconstitutional, arguing the Disciplinary Committee was infiltrated by persons who had no right to be a part of the Committee.

He cited a Member of Parliament (MP), Gifty Kusi, who was included in the Committee to buttress his claim.

The battle has been rancorous with some political pundits concluding the continuation of the legal banter could be injurious to the party’s fortunes in the upcoming election.

Mr Afoko was confident the court would uphold his argument but the court held a contrary opinion. The Accra Human Rights Court presided over by Justice Anthony Yeboah dismissed the case Monday on grounds of lack of substance.

He said the party did not err in co-opting Gifty Kusi into the Disciplinary Committee. He also said the NPP did not contradict any Constitutional provision in the suspension of Mr Afoko.

Even though Mr Afoko said he respected the decision handed down by the court, he disagreed with it.
 
He said he would challenge the decision even to the highest level.

But Professor Ocquaye believes a continuous battle over the issue in the court will not help the reputation of the suspended National Chairman.

He said the suspension of Afoko was without malice but only to ensure that every member of the NPP, irrespective of one’s position, is disciplined and respects the Constitution of the party.

“We can [demand] discipline to the highest level and I dare say that the flagbearer [Nana Addo Dankwa Akufo-Addo] is subject to the discipline of the party,” he said.

According to him, the best option opened for Mr Afoko would be for him to confess and show remorse for the party to forgive him of his wrong doings.

“By your conduct, you can be admitted within a week or two and this happens in boarding school. If you are suspended from school, your behavior will show if you will be readmitted,” he said.

Reacting to Professor Ocquaye on Joy FM, Spokesperson of Mr Afoko dismissed the option of remorse.

Nana Yaw Osei said the suspended National Chairman does not owe anyone an apology for what he has been accused of.

“Who is he showing remorse to, at what and to whom and for what?” he asked, adding, “What wrong has Mr Afoko done to show remorse?”

He claimed it is rather some key members of the party who have to apologise for what they have done to him.