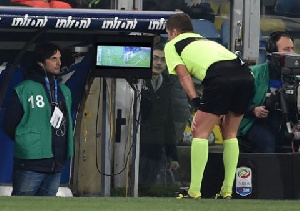 Ahead of the 2019 Africa Cup of Nations, the Confederation of African Football confirmed that VAR would be used in the tournament…but only from the quarter-final stage.

The decision probably prompted a sigh of relief among tournament organisers; while VAR has largely been welcomed in football, it’s also brought with it its fair share of controversy and distraction.

Considering the troubled road that Caf has trodden in recent weeks, months and years, not to mention the problems associated with this tournament—which was stripped from original hosts Cameroon and awarded to Egypt at the death—African football can do without any more unfavourable headlines.

However, with VAR now widely introduced—and increasingly being introduced—into the world game, this progressive Caf regime cannot appear to be out of touch.

So with this week’s quarter-finals kicking off across Egypt, VAR and the Nations Cup will meet for the first time.

There are obvious problems with introducing the technology midway through a competition.

If Tunisia win the tournament, for example, with a critical VAR decision that goes their way between now and the end of the competition, then a thought must be spared for Ghana, who had a goal dubiously disallowed in their Round of 16 defeat by the Carthage Eagles due to a ‘handball’ by Thomas Partey.

It would have been a goal to change the complexion of this finely poised tie, which stood at 0-0 at the time and ultimately went to penalties following a 1-1 draw.

"We had a lot of opportunities to finish the game before 90 minutes,” he told journalists. “If we had VAR to check on the [disallowed] goal, maybe it would have been a different result.

"I think that since [VAR] is being used in the whole world and we all know the benefits [Caf should use it too]. Sometimes if you lose points because of the mistake of a referee, I don’t think it [makes for] the best competition.”

It hasn’t been the first critical refereeing decision made this tournament which could feasibly had gone the other way if referees had had access to the technology, and the Democratic Republic of Congo, for one, will feel that they’d still be standing had VAR been in operation for their Round of 16 tie against Madagascar.

"In future, if Caf can start [VAR] from the onset [of a tournament], I don’t think it will do anyone harm,” added Appiah. “It benefits everyone.

“Any decisions that are taken, the video review referees will show what [they are]. I don’t like criticising referees [but] I think he should look at the video again and judge himself - that's the best thing to do.”

Unfortunately, African teams’ interaction with VAR to date has also been mottled with controversy.

At the Women’s World Cup, Cameroon’s knockout clash with England was overshadowed by the players’ reaction to referee’s decisions and the officials’ use of the technology.

With the Indomitable Lionesses fuming in belief that the referee was using VAR discriminately, and that wrong decisions were being made—with and without consultation of replays—they, at one point, refused to restart the match in a mini-protest at the officiating.

While this kind of behaviour could feasibly have happened before the introduction of VAR, the technology adds another flashpoint to the sport, another twist on the rollercoaster of emotions that accompany football matches, and Cameroon’s ladies were swept up in the maelstrom on the fields of France.