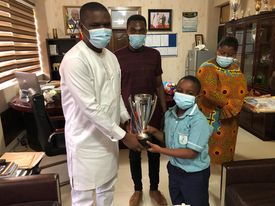 African Under 9 Chess champion, Chief Dave Quansah has paid a courtesy call on the Minister for Youth and Sports, Mustapha Ussif on Friday.

He was there to present his trophy and other medals won during the recently held African Youth Championship in Ghana.

He was accompanied by the National Chess President, Mr Philip Ameku, his vice Christiana Ashley and David Acheampong who is the coach and father of the little champion.

The Minister congratulated the champion for making Ghana proud and encouraged the father and coach to pay particular attention to the champion. 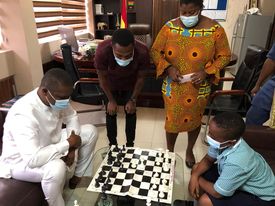 He assured them that the ministry will provide funds for the team to participate in the World Youth Championship slated later in the year.

The president of the Association, Mr. Philip Ameku enumerated some of the challenges facing the Association and asked for the ministry to support them.

The minister assured the Association that his administration is not going to concentrate only on football but will also pay particular attention to what is described as least financed sports.

That’s why he is putting in more effort to ensure the establishment of Sports Fund.

“When the Sports Fund is established with procedures and guidelines as to how funds could be accessed by the various Associations that will be the turning point in the history of Sports in Ghana”.

It will be recalled that last two weeks the young champion and his team were the guest of the President, H E President Nana Addo Dankwa Akufo-Addo at the Jubilee House.