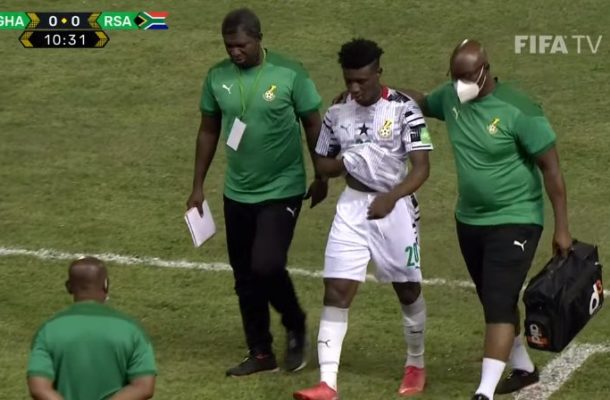 Ajax and Ghana midfielder Kudus Mohammed is set for a lengthy spell on the sidelines with an injury he picked up whiles playing for the Black Stars in their 1-0 win over South Africa in the 2022 World Cup qualifiers at the Cape Coast Stadium.

The creative midfielder got injured last week Sunday when Ghana faced South Africa in the last match of the 2022 World Cup qualifiers.

In the 10th minute, the Ajax midfielder signaled to the bench that he needed attention after an off the ball incident resulted in his injury.

After persistent treatment he was taken off in the 12th minute with Daniel Kofi Kyereh on as his replacement.

Following scans and further assessment by the Ajax medical team in Netherlands, the injury is damning as it will keep the player out until at least next year.

This was confirmed by his Ajax coach Erik Ten Haag after his side's 5-0 win over RKC Waalwijk in the Dutch Eredivisie game on Sunday which the player missed.

There are fears that the Ajax midfielder will miss the African Cup of Nations which will begin in January 9, 2022 barely two months from now.

Kudus Mohammed who had a relatively injury free time at FC Nordsjaelland has all of a sudden become injury prone since moving to Ajax as he has suffered five different injuries since joining Ajax last August.

He has scored one goal in his five-games played for Ajax this season in the Dutch Eredivisie.