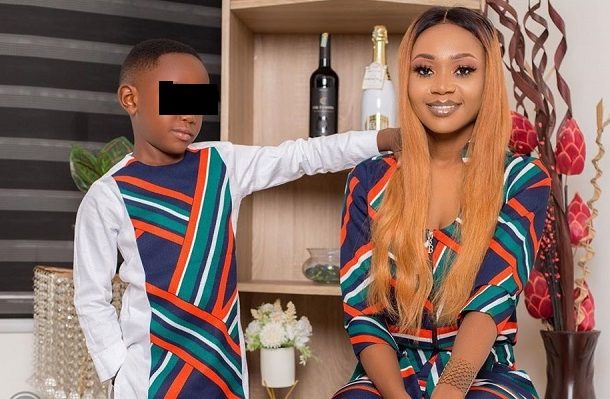 Ghanaian actress and Socialite, Rosemond Brown popularly known in the entertainment circles as Akuapim Poloo has been convicted by an Accra Circuit Court presided over by Mrs. Christiana Cann on her own plea for posing nude with her son for photos.

The entertaining pleaded guilty in court today Wednesday 14th April,2021 after she took naked photos with her seven year old son who is a child (minor) and posted them on social media in June last year.

When the trial started in November last year she pleaded not guilty to the three charges leveled against her but decided to change her plea in court today to guilty.

She has been charged with three counts of publication of obscene material, and two counts of engaging in domestic violence.

However sentencing has been deferred to Friday 16th April,2021 as she has been remanded in Police custody to undergo mandatory pregnancy test.

The actress who is a mother of one, celebrated her son's seventh birthday on June 30,2020 and took naked photos of the child and herself and shared them on her Instagram page.

It went viral attracting a barrage of criticisms as to how a mother could go unclad with her son and take photos and share them on social media.

A complaint was lodged to the Police by Mr Bright Appiah Executive Director of Child Rights International Ghana, and the actress was arrested.

The accused according to prosecution admitted posting the nude pictures but did so accidentally.