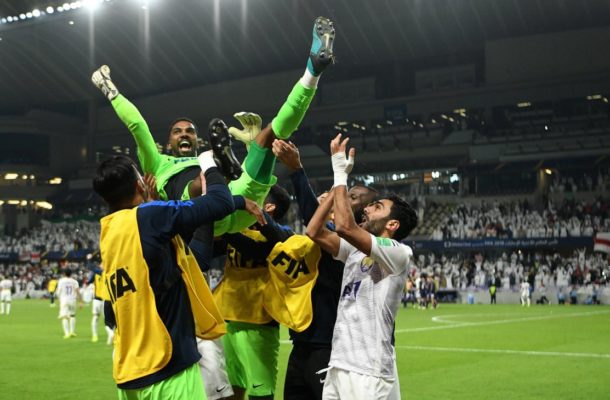 
Eisa made a string of fantastic saves during normal and extra-time before keeping out Enzo Perez‘s penalty in the shootout to propel The Boss towards a final meeting with either Real Madrid or Kashima Antlers. It is the first time an Emirati side has ever reached the FIFA Club World Cup final.

A brace from Santos Borre and a goal each for Marcus Berg and Caio left the match evenly poised at 2-2 after 120 minutes. And just as they had done in the tournament’s opening match against Team Wellington, Al Ain triumphed on spot-kicks.

Ahead of the game, the home fans unfurled a gigantic banner at the Hazza bin Zayed Stadium reading ‘Mission Possible’. It was to prove prophetic. This was a Herculean effort from Zoran Mamic’s team, who have come through a gruelling schedule of three matches and more than 330 minutes of football in six days.

The game had the sort of frenetic opening that has become a hallmark of the FIFA Club World Cup UAE 2018. Remarkably across five matches so far, there have been nine goals in the 16th minute or earlier.

Three of those came on Tuesday night, with Al Ain striking first.

Marcus Berg was finally restored to the starting XI after being laid low by a virus and it took the Sweden striker just three minutes to bag his second goal of the tournament. He met Ahmed Barman’s corner with a stooping front-post header, flicking the ball past River keeper Franco Armani.

But on 11 minutes, River were level. Rafael Santos Borre missed the second leg of the Argentines’ Copa Libertadores triumph through suspension but he returned to the side in devastating fashion in the UAE.

His first was a poacher’s finish, turning home Lucas Pratto’s shot after Khalid Eisa had produced a superb double save to deny Pratto and Exequiel Palacios in quick succession.

Borre was at it again just five minutes later, latching on to a smart through ball by Gonzalo ‘Pity’ Martinez and smashing a right-foot shot across Eisa into the bottom corner.

Al Ain supporters were understandably dismayed but their side quickly rallied and went in search of an equaliser. Jonathan Maidan produced a fantastic block to deny Tongo Doumbia and just before half-time, Hassan El Shehat had a goal ruled out for offside after Italian referee Gianluca Rocchi sought VAR confirmation.

Six minutes into the second half Al Ain finally snatched a deserved leveller. Midfielder Caio ran free into the left of the River penalty area before cutting inside and drilling a low right-foot shot past River keeper Armani.

The goal did little to slow the pace of what was an enthralling, end-to-end encounter. Eisa was in splendid form to deny Borre a hat-trick and he had his upright to thank when Martinez crashed a penalty against the crossbar after Mohamed Ahmad had brought down Milton Casco.

Both sides probed for the winner but it was not forthcoming in 90 minutes, or extra-time. Al Ain came closest as an incredible 118th-minute save by Armani stylishly denied Ahmad from close range, sending the match to penalties.

It was there that Al Ain kept their composure, scoring all five spot-kicks to reach Saturday’s final in Abu Dhabi and make history for the UAE.