Al Somah: This is Syria's time to shine 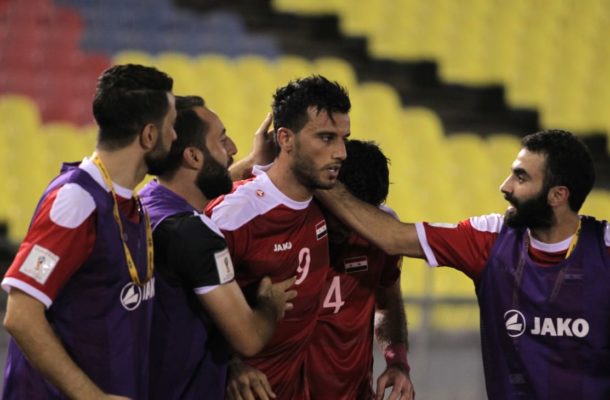 Kuala Lumpur: Omar Al Somah has urged his Syrian teammates to make the most of a once in a generation opportunity and produce a performance to remember at the AFC Asian Cup UAE 2019.


The Qasioun Eagles have never survived the group stage at the Continental Finals, but the current Syrian side is one with ample reason to believe they are capable of going to the knockout stage and beyond.

Prolific striker Al Somah and 2017 AFC Player of the Year Omar Khribin are the spearheads of a talented Syrian squad, which went within 180 minutes of qualifying for the 2018 FIFA World Cup before losing a play-off thriller to reigning Asian champions Australia 3-2 over two legs.

Syria are set to face the Australians again in the UAE but Al Somah isn't interested in looking back, preferring to focus on a competition he believes his side are capable of winning.

"The match against Australia in the World Cup qualifiers is from the past, it is gone," said the star striker, who has netted over 100 times in four seasons with Saudi Arabia's Al Ahli club.

"We started a new era, a more serious one. Everyone knows the importance of the Asian Cup and we are not there just to participate, we want to compete for the title.

"The team has developed and become better since the World Cup Qualifiers, especially with the new coach. Everyone noticed that during the friendly matches.

"The team is complete, no one is missing, and we promise our fans that we will play in a way to make our country proud and happy, and we will not settle for less than the semi-finals."

Syria's Matchday Three clash with the Socceroos is the one which leaps off the page when assessing Group B, which also features Jordan and Palestine.

Head coach Bernd Stange has said Syria's World Cup exit will serve as extra motivation in that clash, but Al Somah stressed the important of remaining focused on one game at a time.

"Everyone saw the Australian team in the World Cup. They have developed from the match we played against them, but also our team has developed a lot, it is not the same side who played against Australia in Malaysia and Sydney (in September 2017)," he explained.

"Our schedule will be against Palestine, then Jordan, then Australia, so our concentration will be on the first match, then after that the second match, and we hope we will go to the match against Australia with six points, and already qualified.

"The coach knows the team, and the most important thing is to qualify to the second round. At that stage, the result against Australia might not be important, but we always play to win in every match."

Unable to play matches on home soil, Syria have struggled somewhat in friendly matches staged in West, East and Central Asia during their build-up to the Finals, with recent wins in Bahrain and Kuwait their first since Stange's appointment in January.

But, with four international goals to his name in 2018, there have been few complaints about Al Somah's individual contribution, and the goal machine said there are no excuses for his team come January.

"Our team is complete, we are not missing anything," he declared. "We thank the Syrian Football Association who hired a good international coach who has a modern style of play and has developed the team a lot in a short time."

"As I said, we are not going to play just for participation, but also to compete for the title."