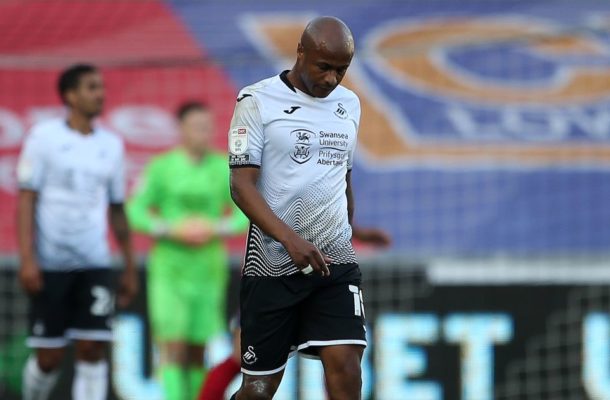 Swansea City did not only drop points against Wycombe in the English second tier match on Saturday but talisman Andre Ayew also suffered an injury.

The Welsh side drew 2-2 with Wycombe at their backyard denting their slim hopes of securing automatic promotion.

Andre Ayew Suffered an injury very early in their 2-2 drawn game against Wycombe and was substituted for precautionary reasons.

The Ghana captain was replaced by Wayne Routledge who came on for his 300th appearance.

Ayew's early shower had a toll on the team as they lacked bite upfront.

The Ghana captain has been integral for his side as he has scored 15 goals in 40 matches while providing four assists.

This will go down as a missed opportunity given that Watford lost at Luton, although Swansea were staring at defeat themselves with 11 minutes remaining.

But Jamal Lowe's penalty and a Liam Cullen header saw Steve Cooper's side snatch a draw.

They are six points behind second-placed Watford, while Wycombe are nine points adrift of safety at the bottom.

Swansea had revived their top-two bid coming into this game courtesy of wins at Millwall and Sheffield Wednesday.