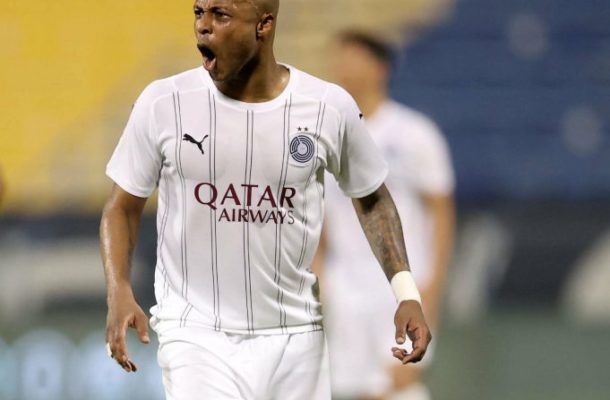 The former Swansea ace scored as they defeated Al Arabi 4-0 in a one sided derby game in their match day five game at the Grand Hamad Stadium.

The attacker’s second-half penalty was the icing on the cake as his side sealed victory.

The win puts the Boss three points clear at the top of the league table, but with one game more than closest contenders Al Duhail, who are the only other side to have recorded wins in all matches played so far this term.

Ayew has now tallied four goals in five matches played for Al Sadd, having only failed to score on his debut against Al Sailiya.

Since his bow, he has netted consecutively against Qatar SC, Al Rayyan, Al Shamal and now Al Arabi.

The 31-year-old joined Xavi Hernandez’s side on a two-year renewable contract in July after ending a spell with EFL Championship fold Swansea City.

Having seen a first effort cancelled out by a video assistant review, Al Sadd took the lead against Al Arabi through Algeria striker Baghdad Bounedjah who slotted in a rebound in the 59th minute after goalkeeper Mahmud Aboundi failed to collect Abdel Karim Hassan’s shot first time.

Two minutes later, the visitors doubled the lead when Akram Afif set up Hassan Al-Haydos whose shot from outside the box flew into the right corner of the net.

In the 74th minute, Afif provided his second assist of the day, this time playing through Bounedjah who made no mistake to plant the ball into the net and make it 3-0.

The 31-year-old registered his fourth goal of the season for the Doha based club on the 82nd minute via a spot-kick.