Andre Ayew to return before the end of the season 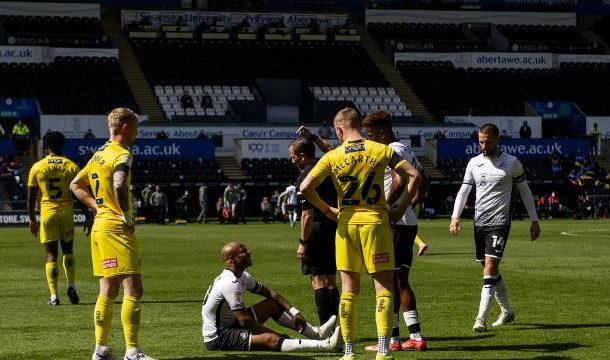 Black Star Skipper Andre Ayew is set to return to fitness before the end of the season for Swansea, Head Coach Steve Cooper has revealed.

Cooper looks hopeful as the Swansea City forward recovers from a hamstring strain.

Ayew missed the home defeat to QPR on Tuesday night, having been forced off during the early stages of the weekend draw against Wycombe.

And, while head coach Steve Cooper was not hopeful of having the Ghanaian available to face Reading on Sunday, he is more confident of having his top scorer back in time for the final home game of the season against Derby.

“He is out with a hamstring injury, it is a grade one so he is unlikely to be available for Reading, but hopefully he will be okay for Derby,” said Cooper of Ayew.

“It could have been worse, for sure. Hamstring injuries can be nasty, it could have ruled him out for the rest of the season.

“But it will not do that, we will have to see if he could be ready for Sunday in a few days or so."

Ayew was stretched off in the early stage of the game against Wycombe.

His return in time will be a good news for both club and country as the Black Stars kick starts their 2022 as the World Cup qualifier in June.