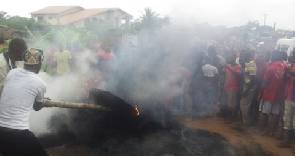 Residents of Krobonso in the Kintampo South District of the Brong Ahafo Region have burnt alive two people suspected to be armed robbers.

The suspected robbers were burnt in their vehicle on Thursday night.

Unit Committee Chairman of Krobonso, Kwadwo Appiah, who disclosed this to Adom News said two other people who are believed to be accomplices are at large.

According to him, residents in the area have been having sleepless nights because armed robbers keep terrorizing them.

He said these robbers threaten the lives of residents and later make away with motorbikes and vehicles every night, a situation he described as very worrying.

Luck eluded the two suspects when they were spotted by some youth in the area who then raised alarm, which attracted many of the residents to the scene.

The incensed residents, many of whom have suffered several robbery attacks in recent times, subjected the two suspects who attempted to flee in their Toyota Land Cruiser to severe beatings using clubs, stones and other objects.

He said the angry residents then poured diesel on them and set them ablaze.

The matter has been reported to the police.