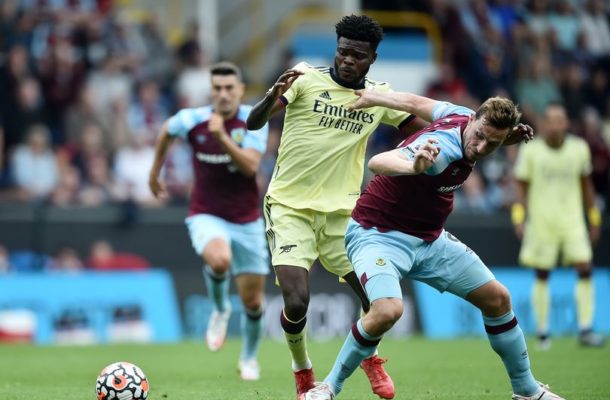 Mikel Arteta has provided an injury update on Thomas Partey and Kieran Tierney after the duo had to be substituted during Arsenal's 1-0 win over Burnley.

Partey was forced off in the second half and replaced by Ainsley Maitland-Niles as he made his first full Premier League start since returning from injury.

The Ghana midfielder had missed the opening three league games of the campaign as well as the 6-0 Carabao Cup win over West Bromwich Albion with an ankle injury sustained in a pre-season friendly against Chelsea.

28-year-old Partey impressed at the heart of Arsenal's midfield at Turf Moor as his progressive passing and direct runs helped cause problems for the opposition defenders.

"He's the one who has to read what is happening and make the rest better, that's his biggest job to get the right balance in the team, the right fluidity in the attack. How he manages the transition is top, he has a charisma.

"He struggled at the end. He was cramping but that will come because he's missed a long time. He needs some fitness back."

Kieran Tierney also came off in the latter stages of the 1-0 win but Arteta believes the Scotland international did not sustain anything serious.

"Again he had a problem. I think he was cramping. The pitch was pretty difficult today it was quite long."