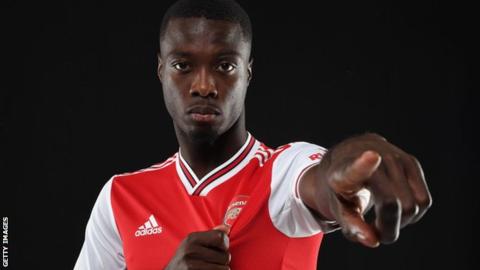 Arsenal have announced the signing of Ivorian winger Nicolas Pepe.

Pepe, 24, has signed a five-year deal at the Emirates after Lille and Arsenal agreed a record fee of approximately £70 million to be paid in instalments to fit Arsenal’s budget.

The Ivorian’s departure has been imminent for a while now. Lille chairman Gerard Lopez said back in April that it was ‘certain’ Pepe would leave as he was ‘now in a price range they cannot afford’.

There is no doubting that Pepe will become an important member of the Arsenal side, as the Gunners were often accused of lacking pace and dynamism during a 2018/19 campaign which saw them miss out on the Champions League by the skin of their teeth.

“Nicolas is a highly-rated and talented winger who was wanted by many of the top teams in Europe,” Unai Emery told the club’s official website.

“Signing a top-class winger has been one of our key objectives in this transfer window and I’m delighted he’s joining.

“He will add pace, power and creativity, with the aim of bringing more goals to our team.”