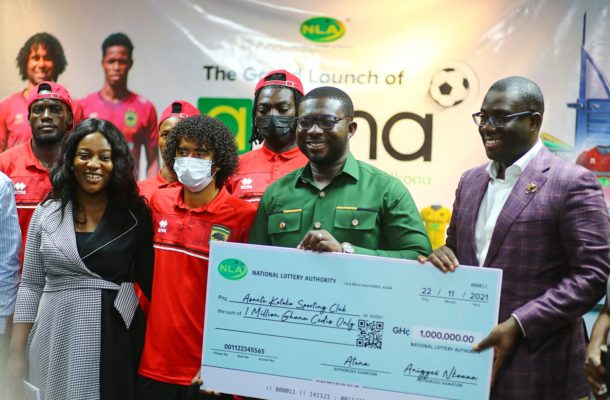 Kumasi Asante Kotoko have sealed a mammoth partnership deal with state owned National Lottery Authority(NLA) after talks between both parties.

The reds keep swelling their commercial base with new sponsorship and partnership deals almost every now and then.

On Monday the club made an official announcement about the partnership deal at a press conference at the plush Golden Tulip Hotel in Kumasi.

Asante Kotoko's deal with the National lottery body will be mutually beneficial to the two sides .

The NLA also used the occasion to unveil their new game called the Atena.

Explaining the mechanics of the Atena Game Mr Bernard Buamah the Head of Marketing and Caritas Platform of the National Lottery Authority said “we should all help bring back the love of Ghana football by supporting this novelty. One would have to predict 5 jersey numbers of the team to be drawn by dialing *780# to follow the prompts to enter the game. An entry cost’s Ghs 2.00 and there were no limitations to the number of times one could play.

“An interesting twist to this game was the opportunity of the NLA’s traditional lotto players to play this game at GHS 1.00 by entering their serial numbers on their lotto coupons before playing their selected jersey numbers. Prices to be won in this game included cash, electronic appliances, fuel coupons, replica jerseys, match tickets and grand prizes of a salon car and all expenses paid trip to Dubai”.

The National Lottery Authority(NLA) is the 13th sponsorship/partnership agreement signed by the porcupine warriors under the management of Nana Yaw Amponsah.