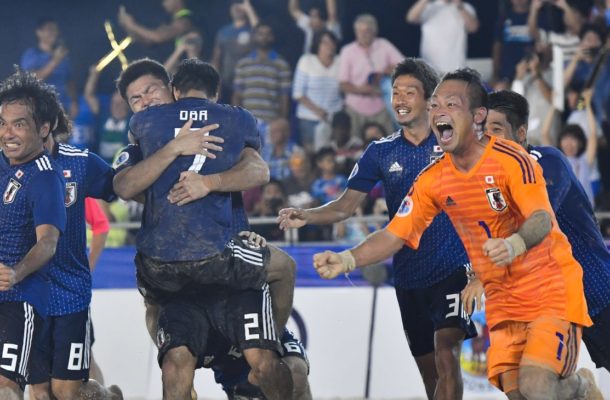 Pattaya: As Japan celebrated clinching the AFC Beach Soccer Championship Thailand 2019 title, head coach Ruy Ramos expressed joy at the achievement, and revealed his belief that Asian teams are capable of challenging at the global Finals.


The East Asians emerged as champions after an epic, arm-wrestle of a final against United Arab Emirates, with Takaaki Oba finally delivering the knockout blow to seal victory in a penalty shootout after the match finished 2-2 on Sunday.

Ramos, who won the AFC Asian Cup with Japan as a footballer in 1992 after arriving in the country 15 years earlier, revealed his elation at sealing the momentous win.

"We knew it was a final, so it would be a very difficult game. All four teams that qualified for the semi-finals, any of them could possibly have been the champions," he said.

"But, at this time, I am glad it was us. I am really pleased. When Oba scored the winning penalty kick, I felt truly happy."

Japan, along with UAE and third-place finishers Oman, will now represent Asia at this year's FIFA Beach Soccer World Cup in Paraguay.

Brazilian-born Ramos will guide his adopted nation to the World Cup for the fifth time, and he insists Japan will not be going to South America just to take part, calling on Asian teams to repeat the achievement of Islamic Republic of Iran in 2017, and challenge for the title.

"We expect Asia to be better at the World Cup (in 2019). Japan, Oman, UAE, as well Iran and Bahrain, are very strong teams.

"My wish for the future is that the best four in the World Cup will all be Asian countries."

The experienced coach also paid tribute to captain Ozu Moreira, who scored nine goals throughout the tournament to win the MVP and top scorer awards.

Ramos played a key role in the 33-year-old gaining Japanese citizenship, with the Rio-born duo first working together as members of the coaching staff when Japan were last Asian champions in 2011, before Ozu became naturalised the following year.

Meanwhile, UAE head coach Mohammed Almaazmi paid tribute to his heartbroken team, who fought back from 2-0 down to force extra-time, only to slip at the precarious final hurdle of a penalty shootout.

"I would like to thank my players. I'm so proud of my players," he said.

"It was a hard game. Japan's team is very hard to play against, but I think the luck was not on our side."

UAE also lost the 2017 final, by a margin of 7-2 against Iran, but Almaazmi said he found no comfort in the fact they performed better in the decider this time around.

"When you lose, it means you lose. It's the same thing, whether it's penalties or any other score," he said.

"For me, it's the same. So I give my congratulations for Japan."Source: the-afc.com