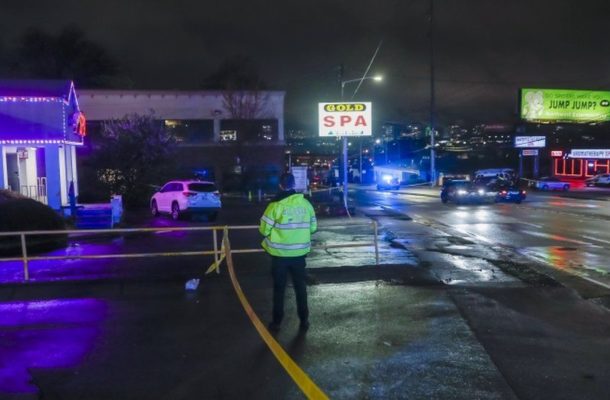 Eight people, many of them women of Asian descent, have been killed in shootings at spas in the US state of Georgia.

Police said the shootings took place at a massage parlour in Acworth, a suburb north of Atlanta, and two spas in the city itself.

South Korea later confirmed that four of the victims were of Korean descent.

Officials said a 21-year-old man had been arrested and was believed to be the suspect in all of the attacks.

No motive has yet been established, but there were fears that the crimes may have deliberately targeted people of Asian descent.

Hate crimes against Asian-Americans have spiked in recent months, fuelled by rhetoric that blames them for the spread of Covid-19.

In an address last week, President Joe Biden condemned "vicious hate crimes against Asian-Americans who have been attacked, harassed, blamed and scapegoated."

What do we know about the shootings?

The first shooting happened at about 17:00 (21:00 GMT) on Tuesday at Youngs Asian Massage Parlor in Acworth, Cherokee County.

Sheriff's office spokesman Capt Jay Baker said two people died at the scene and three were taken to hospital, where two more died. He later confirmed that the victims were two Asian women, a white woman and a white man, and that a Hispanic man had been wounded.

Less than an hour later, police were called to a "robbery in progress" at Gold Spa in north-east Atlanta.

"Upon arrival, officers located three females deceased inside the location from apparent gunshot wounds," police said in a statement.

While there, officers were called to a spa across the street, called Aromatherapy Spa, where they found another woman shot dead.

Police quoted by the Atlanta Journal-Constitution said that all four Atlanta victims were Asian women.

Investigators who had studied CCTV footage then released images of a suspect near one of the spas. Police said that, after a manhunt, Robert Aaron Long, of Woodstock, Georgia, was arrested in Crisp County, about 150 miles (240km) south of Atlanta.

Capt Baker said investigators were "very confident" that the same suspect was the gunman in all three shootings.

The identities of the victims have not yet been made public. Authorities in South Korea said they were working to confirm the nationalities of the four women of Korean descent.

What has the reaction been?

Authorities say it is too early in the investigation to know if the victims were targeted because of their race or ethnicity.

The advocacy group Stop AAPI Hate, which tracks attacks on Asian Americans and Pacific Islanders, said it was not clear "whether or not the shootings were related or motivated by hate. But right now there is a great deal of fear and pain in the Asian American community that must be addressed".

It called the shootings "an unspeakable tragedy" for both the victims' families and the Asian-American community, which has "been reeling from high levels of racist attacks".

Ben Crump, a leading civil rights lawyer, also took to Twitter, saying: "Today's tragic killings in #Atlanta reaffirm the need for us to step up and protect ALL of America's marginalised minorities from racism."

Atlanta police said they were increasing patrols around businesses similar to those attacked.

The New York Police Department's counter-terrorism branch said that while there was no known connection to New York city, it would "be deploying assets to our great Asian communities across the city out of an abundance of caution".

The police department in Seattle also said it would would increase patrols and outreach to support its Asian-American community.

Georgia Governor Brian Kemp praised law enforcement officials for their response to the shootings, and said: "Our entire family is praying for the victims of these horrific acts of violence."

US Secretary of State Antony Blinken addressed the shootings ahead of a meeting with his South Korean counterpart on Wednesday. "We are horrified by this violence which has no place in America or anywhere," he said.

"We will stand up for the right of our fellow Americans, Korean Americans, to be safe, to be treated with dignity."

The White House said US President Joe Biden had been briefed on the "horrific" shootings.