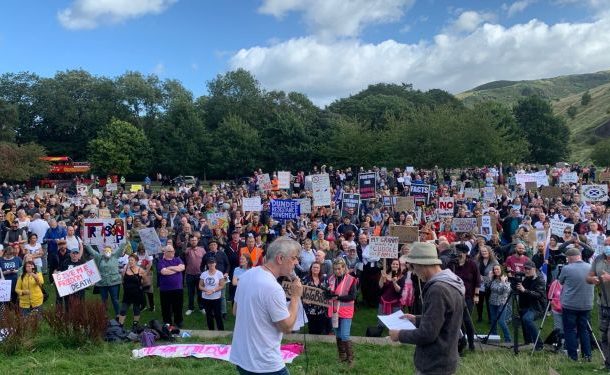 Anti-mask and anti-lockdown sentiment is growing throughout Europe, leading to mass demonstrations against what they consider to be an encroaching government tyranny.

Hundreds flocked to Edinburgh's Parliament Square on Saturday in a massive demonstration against mandatory mask-wearing and further lockdown measures in the wake of the coronavirus pandemic.
Walking into parliament square, for a brief moment, one might assume the flock of South African demonstrators against the treatment of farmers in their home country was the protest of the day.
However, just behind, in the shadow of Arthur’s Seat, a sea of mask-less people can be seen who had come out to oppose what they consider to be the “state tyranny” of mandated measures to aid in the slowing the spread of COVID 19.

Jonathan, 26, from the Scottish Libertarian Party, said that the reason he and his mother joined in the demonstration was due to a “realisation that their basic freedom and liberties were being taken away”.

“The way businesses are being destroyed.. and the economy decimated, you have more to worry about people falling into poverty as a result of the economy going pear-shaped, therefore meaning lower immune systems than ever”, he said.

He described the efforts by the government to introduce public vaccines as “absolutely shameful”.

His mother said she blames vaccinations for Jonathan's high-functioning autism - a myth which has long been rejected as pseudo-science.
An organiser, who did not give his name, said that he came out to give an “objection” to the government's use of a “sledgehammer to crack a nut”.

“The laws are being implemented which are restrictive of people’s freedoms. There’s an awful lot of fear-mongering by the media and that’s why you’ve got all these sheep going around with masks on all the time when it’s completely unnecessary”.

When asked about what he believes the unnecessary consequences of the lockdown were, he highlighted the ending of essential surgeries and other health services due to focusing on lockdown.

“People aren’t getting treatment for cancer. As much as 50,000 people have died as a result”, he said.

In response to being asked about ‘Operation Cygnus’, an exercise by the UK government of a pandemic response which observed that the National Health Service was incapable of coping with a similar national crisis on top of decades of public sector underfunding and privatisation, the organiser said: “that doesn’t justify the draconian measures”.

Not everyone was happy about the demonstration, however. A South African woman who has lived in Edinburgh for 13 years was eager to express her frustration with the protestors.

“I’ve had friends who have been completely brainwashed by certain media channels”, she said.

“There are plenty of examples in history, namely polio, where vaccines should have been applied and weren’t”.

She continued by saying she was upset by the protestors who are “spreading the virus and they have no respect for what is a global pandemic”.

A series of speakers, lauding their expert titles in medicine and science, stood up to address the crowd.
Scottish Dr Malcolm Kendrick highlighted how the encroaching economic crash as a result of lockdown will kill more people than the virus.

Professor Dolores Cahill hit out against both the lockdown and mandatory vaccination and the alleged dangers of heavy metals present in vaccines.
She expressed her support for the “free market” and said that the coronavirus pandemic was being used as an excuse to introduce an anti-democratic system that stymies freedom of speech.

​Professor Cahill also pledged to help build links with other European anti-lockdown movements to oppose restrictions introduced amid the ongoing coronavirus pandemic.
Cahill, who chairs the Irish Freedom Party which has links to the European alt-right movement, was asked to resign from the European Union’s scientific committee earlier this year over claims that those afflicted with COVID-19 become “immune for life” after 10 days.
She repeatedly championed Hydroxychloroquine, a malaria drug notably promoted by US President Donald Trump, as a treatment for the disease.

A Growing Movement The demonstration in Edinburgh follows a similar ‘Unite for Freedom’ protest in London which saw an array of organisations express their opposition to lockdown restrictions.
Similar displays have been seen across Europe, particularly in Germany, which saw tens of thousands turn out to a rally against the suggestion of a second lockdown and the country's social distancing measures.
What one notices when in attendance at an anti-lockdown ally is the impressive patchwork of all manner of ‘anti-establishment’ sigils from QAnon shirts, to Gadsden Flags, and anti-5G network posters.

Yet there is a common denominator in each speaker’s address. As much as they may rally against the ‘new normal’, what was until now considered normal has blatantly failed, according to their own statements.
Whether it’s skepticism of lockdown restrictions or opposition to the existence of the state in general, today's rally provided a medium for that unifying rage to materialise in a way that was instinctually against a system which so far has only worked in the interests of those who hold economic power and their political representatives.
Every crisis, real or imagined - and the coming economic collapse is very real, the protestors have that right - is going to be shaped and determined by a particular economic class for its own interests. In an effort to castrate itself at the shrine of electability, that material narrative is no longer coming from the traditional opposition and Labour movement.
It’s going to have to come from somewhere.