Ayisha Modi explains why she and Rev. Obofour refused to build a house for Psalm Adjeyteyfio 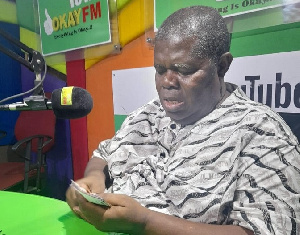 Popular music investor, Ayisha Modi, has disclosed that she and Rev. Obofour refrained from their decision to build Psalm Adjeteyfio (TT) a house because they needed to attend to a much more pressing need of another Ghanaian celebrity.

She said, with the manner in which donations were pouring in for TT at that time, particularly from Vice President Mahamudu Bawumia, they had to shift their resources to helping another ailing veteran actor, Jagger Pee.

Narrating further, Ayisha disclosed that Psalm Adjeteyfio at a point tried to play smart by denying that he had a piece of land they could use for the project.

She said upon investigations, they found out that TT had a piece of land somewhere but earlier, he insisted several times that he had none.

According to Ayisha, all these factors made them develop cold feet towards the project, and eventually, they held back from implementing it.

“Initially he claimed to have a land somewhere but when we asked him, he said he doesn’t own any land. We did our own investigations and suspected foul play. He tried to trick us. After we sensed that he was trying to play smart, we shifted our attention to Jagger Pee who was in a very deplorable state by then. Jagger Pee’s treatments cost about GH₵7,000 every year. We also saw how donations were pouring in for TT at that time so we shifted our attention to Jagger Pee,” She stated in an interview with SammyKayMedia monitored by GhanaWeb.