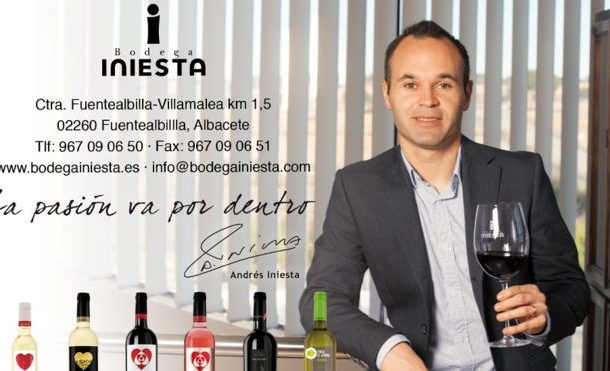 Former Premier League managers Sir Alex Ferguson and Harry Redknapp were well known for their love of wine, but none of them went so far as to own a vineyard or winery.
And today's star players are more likely to put their riches into sports cars or flashy apartments, than invest in anything as esoteric as the cultivation of the grape.

However, outside of the UK it is different, with former Milan, Juventus and Italy star Andrea Pirlo being well known for his love of wine.

The classy midfielder, now playing in New York, owns the Pratum Coller vineyard outside Brescia in Italy, which produces up to 20,000 bottles of wine a year.

And a few years ago Barcelona star Lionel Messi put his name to a series of wines produced in his homeland of Argentina.

But perhaps less well known, due to his quiet demeanour, is another famous Barcelona star putting his time and money into wine production - midfielder Andres Iniesta.


Iniesta has won every honour going with club FC Barcelona, including eight La Ligas and four Champions Leagues, and he also scored the winning goal in the 2010 World Cup final for Spain.

Only this week Argentina's 1978 World Cup winning manager called Iniesta, who is the most decorated Spanish player ever, the best in the world.

But if you lived in Spain you might also see his face beaming out from advertisements promoting wines from his family business, Bodega Iniesta.

"This is a small business, and all the family is involved in it, including Andres," the firm's export manager Jose Ramon Cuenca Jara says at their trade stand at Soccerex.

"The family already owned the business before he became a successful football player, and as he has grown up he has also become involved."

Iniesta is the third generation from his family to take a role in the business, which was established by his grandfather Jose Antonio.

There are 180 hectares of vineyards, and all the wines are made from their own grapes.

The business, based near Albacete, is two hours' drive from Valencia, and two-and-a-half hours from Madrid, with the wines produced coming under the geographic appellation Manchuela.


Iniesta was born in Fuentealbilla, a small village in the province of Albacete, Castile-La Mancha, and it was his performances for a youth team from Albacete that led him to signing for Barcelona at the age of 12. "He is from the area where the wine business is, and he has never forgotten his roots there," says Mr Cuenca Jara.

"When he became a star player at Barcelona he invested a lot of his money into the business.

"This enabled the family to then start producing wines. Before that they did not make their own wines, but sold their grapes to a local co-operative."

But before that, from the time that Iniesta had broken into the Barcelona B team in 2000 at the age of 16, he had helped the family to expand their vineyard and to grow new types of grapes.


Despite being in the top handful of players in the world, Iniesta still has time for the family business.

"Of course he still takes in interest," says Mr Cuenta Jara. "This is not just a marketing operation where a famous footballer sticks their face and name onto a product."

Indeed when a new range of sparkling wines was launched in the summer of 2015, it was the midfielder who introduced it to the media.

"He takes a close interest in the vineyard and winery. He spends time visiting the vineyard every summer and at Christmas time," says the firm's export manager.

"If he just wanted to make a lot of money out of wine, rather than really caring about it, he could have bought a winery in Rioja, which is a better known wine region."

The operation employs 35 people, 25 in the winery, and 10 full time in the vineyards.

Many of those staff are members of the extended Iniesta-Lujan family, and his sister also works for the firm.

"It is a very rural area, and the people there really appreciate the efforts that Andres is making." says Mr Cuenta Jara.

"We thought that as he invests in our area we would name some wines associated with him as a means of gratitude."

Thus the company sells a wine that is named after his daughter Valeria, and another after his son Paolo Andrea.

Meanwhile, another wine called "116" commemorates the minute in the match when he scored the winning goal in the 2010 World Cup final.


Overall, one million bottles of wine were produced by Bodega Iniesta in 2015 and it hopes to produce 1.2 million this year.

The wines, which include reds, roses, whites, and sparkling, are available in 33 countries, including East Asia, south, central and north America, and west and east Europe. In the UK they sell for £6.50 to £17.

"But also the family has an input to make sure they accord with the quality associated with the image of the footballer Andres Iniesta," says Mr Cuenta Jara.

He adds that such is the respect for Iniesta in Spain that he is able to sell his wines in Madrid, the home of arch rivals Real.

"Also, he is a typical Spanish family guy, which people appreciate. And he does not get involved in political controversy, which some other Barcelona or Real Madrid players sometimes do."