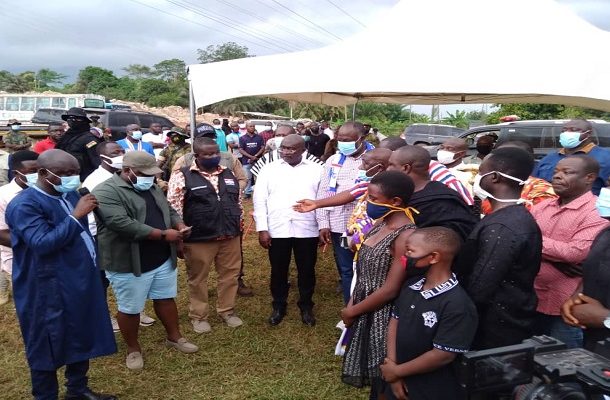 Alpha Gold presenting the cheque to the bereaved families

The support according to Mr. Nyarko, is to foot the victim's medical expenses and their personal needs.

He made the donation during the Vice President's visit to Batabi in the Asene Manso District of the Eastern Region on Sunday.

Dr. Alhaji Mahamudu Bawumia who was on 3-day tour of the Region, stormed Batabi and presented an amount of GHC200.000 to the victims.

Mr. Bawumia also used the opportunity to access the situation on the accident scene and sympathized with the families who lost their relatives in the Tuesday tragedy.

Explaining the rationale behind the gesture, Mr Kissi Nyarko said as a philanthropist, he realized the importance of supporting the victims and thier families to reduce their cost as a result of the tragedy.

He said he has offered similar help to some individuals in the past and sees nothing wrong in doing same the Batabi church collapse victims and the beveared families.

He promised to support them again when the needs arise and also appealed to the general public, to help the poor and the needy, especially in times of tragedies.

The three-storey building which served as a structure for the Church of Prosperity collapsed around 2 pm on Tuesday, October 20, 2020.

So far, 30 persons have been retrieved, eight of which were alive.

Of the dead persons, 12 were female and 10 were males.

The Director-General of the National Disaster Management Organisation (NADMO), Eric Nana Agyemang Prempeh, disclosed preliminary investigations into the cause of the collapse of the building point to the use of substandard materials to construct the three-storey building.