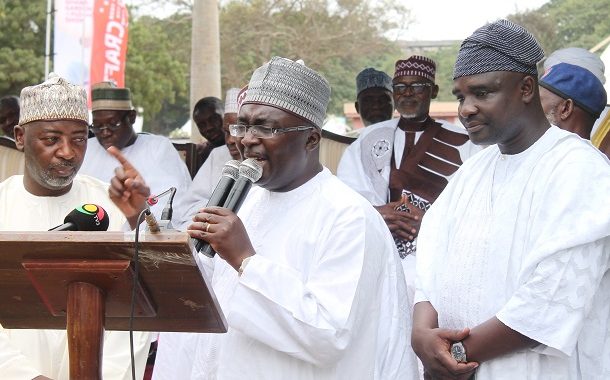 The Electoral Commission (EC) must ensure transparency, fairness and credibility in all the phases of Ghana's electoral process to guarantee peaceful elections.

The vice-presidential candidate of the New Patriotic Party (NPP), Dr Mahamudu Bawumia, who made the call, said the only way to guarantee a peaceful election was to ensure  fair, transparent and credible election.

Dr Bawumia, was speaking at a ceremony to mark the Eid-ul-Adha at the Efua Sutherland Children’s Park in Accra yesterday.

Prayers were said for peaceful elections in December.

Testing the Muslim faith and obedience

The Deputy National Chief Imam of Alhussumma Wal Jama’a, Sheikh Mohammed Kamil Mohammed, led the prayers which brought together Muslims from different parts of the city.

They showered praises on Allah for preserving them for an additional year and giving them the opportunity to observe a sacrifice to earn His blessings.

Eid-ul-Adha is a festival of sacrifice in honour of Prophet Ibrahim (Abraham), who obeyed Allah's command to sacrifice his son Ismail. It is a religious obligation in Islam that Prophet Muhammed amplified more than 1,400 years ago.

Eid-ul-Adha is an occasion that tests the faith and obedience of Muslims to Allah’s command. Those who can afford it are required to buy and sacrifice animals.

The celebration is also a moment to promote goodwill among Muslims and between Muslims and adherents of other religious faiths. Eid-ul-Adha also seeks to bring about peaceful coexistence and harmony between the rich and the poor in society.

Dr Bawumia said he was optimistic that Ghana would have peaceful elections by the grace of Allah as it had always been so in the past years.

In his sermon, Sheikh Mohammed said there was the need to sustain the peace and stability of the country in the upcoming elections.

“Even though we have scaled through five of such elections peacefully since 1992, we have had on each occasion to work diligently to sustain the peace,” he stated.

He also urged the EC to leave no stone unturned in ensuring free, fair and credible elections, adding that “presidential candidates must be patriotic enough to accept the results so that at the end of it all, Ghana will be the ultimate winner”.

Concerning education for the Muslim community, Sheikh Mohammed urged Musliums  to position themselves well to tap the opportunities offered by the nation.

“Muslims are contributors to the economic growth of the country and we can only do so when we arm ourselves with education,” he added.

The Minister of Roads and Highways, Alhaji Inusah Fuseini, in his address, also called for peace before, during and after the elections.