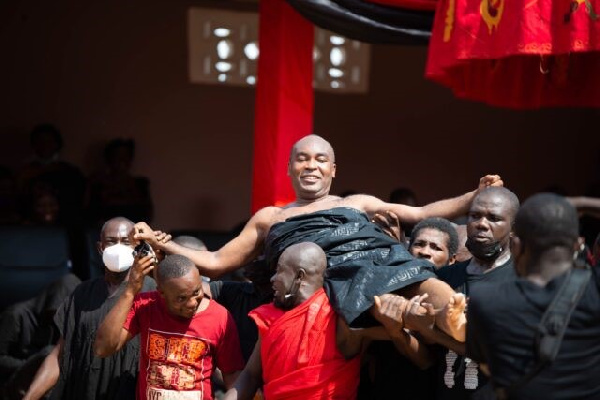 Vice President Dr. Mahamudu Bawumia’s Executive Secretary, Augustine Blay has been installed Boafohene of Sefwiman for his immense contribution to Ghana’s digitalization agenda and to the development of the Western North Region.

The citation that came with his coronation said in part that he was being installed Boafohene (chief helper) because of his “dual roles in helping the government and Vice President Bawumia carve Ghana’s digitalization agenda and the development of the Western North Region.”

The coronation took place during the Eluo Festival at Okogyeabour Fie in Sefwi-Wiawso in the Western North region. His stool is now Boafohene Nana Yaw Awuah I.

Augustine Blay, whose expertise are in digital innovation, digitalization, innovation culture and innovation ecosystems, is credited with being instrumental in all the digital innovations being led by his boss, the Vice President. It has been gathered from key industry players, that Augustine Blay has been the chief cornerstone behind the Vice President in the development and implementation of all the national digitalization programmes.

Besides being the expert brain beside the Vice President in the digital economy journey, Augustine Blay is also credited with personally supporting a number of projects and initiatives in the newly demarcated Western North Region and the Bia West District where he hails from.

Augustine Blay and his wife

According to the linguist of the Omanhene of Sefwi-Wiawso, Katakyie Kwasi Bumagama II, Augustine Blay has been a vessel of tremendous help to the people of the Western North as a whole by giving them job opportunities and taking care of the education of many underprivileged children.