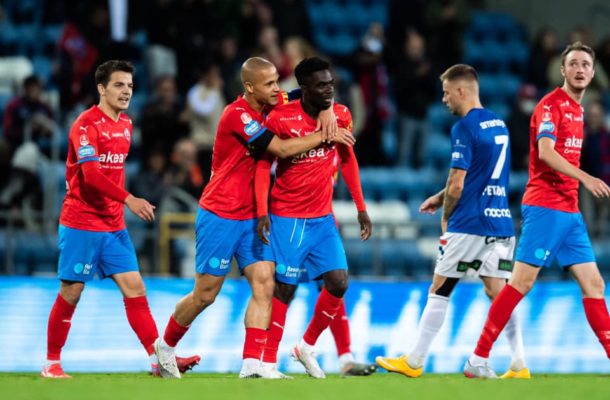 Ghanaian midfielder Benjamin Acquah was on target as he scored his first goal for his side Helsingborgs IF in their 1-1 stalemate against Trelleborg  in Sweden Suprettan on Tuesday evening.

There was a lot at stake for both teams aside the match being a local derby as it was also used as a testimonial for Andreas Granqvist who retired this summer and played for Helsingborgs.

It was an end to end game which failed to produce any goals as the first half ended 0-0 with no team able to break the deadlock.

But things changed as the Ghanaian opened the scoring in the 75th minute before they tried to hold onto but it was not possible.

As in the 89th minute, Mattias Hakansson drew the away side level as he made it 1-1 for Trelleborg.

The testimonial for Andreas Granqvist who is now a director for Helsingborgs IF did not go to plan as they dropped points but they still sit atop the league.