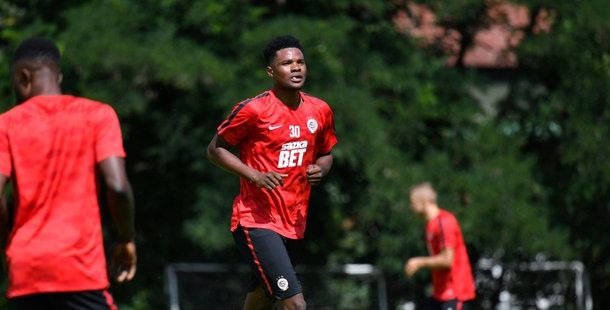 Ghanaian forward Benjamin Tetteh joins Sparta Prague in pre-season training ahead of his imminent move to the Generali Arena.


According to the agreement, Sparta Prague's promising forward Lukáš Juliš will join Bohemians on a year loan deal but midfielder Rudolf Reiter and Jakub Nečas will still continue their loan spells with the Kangaroos.

Benjamin joined Belgian giants Standard Liege in 2015 but had to be loaned to Slovacko after failing to establish himself in the team.

The former Ghana youth forward was not recalled back by Liege as he remained on loan in Czech but with Bohemians 1905.

Sporting Director of Sparta Prague Zdeněk Ščasný was full of praise for the 20 year old hitman; “We've been watching Tetteh for a long time, this is a type of top player we do not currently have in the squad, and we also see that he has great potential to improve: he is a modern striker strong in personal battles, we know he could be more effective, we are convinced that the next step to developing his career can be done with us“

Here are some pictures of Benjamin Tetteh training with Prague below: