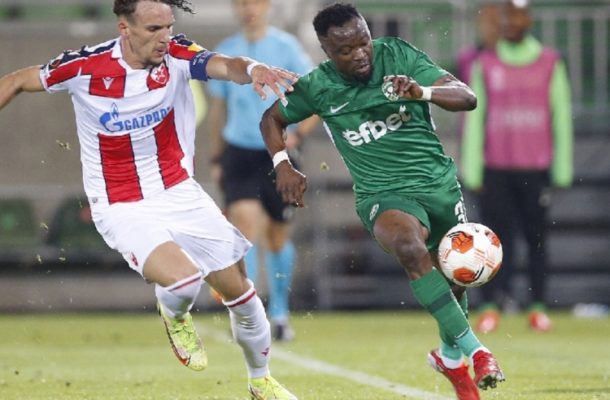 Ghanaian winger Bernard Tekpetey could not prevent his side Ludogorets Razgrad from losing on Thursday evening as they lost 1-0 against Serbian side Red Star Belgrade in the second round of the UEFA Europa at the Huvepharma Arena in Razgrad.

Despite home comforts, it was not enough as Ludogorets Razgrad were beaten by Red Star Belgrade.

Bernard Tekpetey played the entire duration of the game but was powerless to prevent his side from losing the match.

The Ghanaian forward who has been in good form, nearly opened the scoring in the early minutes of the game when he was put through by teammate Josue Sa but the former Schalke 04 winger passed the ball to Goncalves who failed to score.

There was nothing to separate both sides as the match headed into the break at 0-0.

After recess the Serbian side took the lead in the 64th minute with Gabonese midfielder Guélor Kanga the goal scorer.

The Bulgarian side got a draw against Danish side FC Midtjylland, while Red Star picked up a 2-1 home victory over Braga.