Bernard Tekpetey scores for Ludogorets Razgrad in win over Boroe 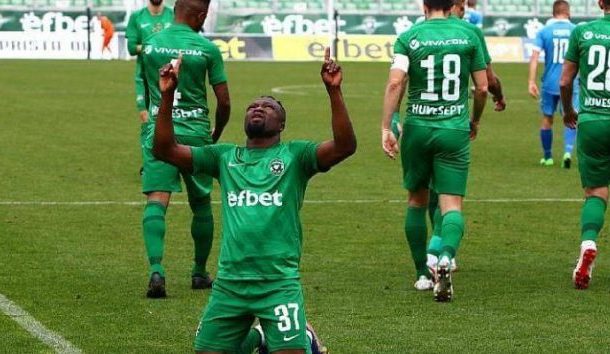 Ghanaian forward Bernard Tekpetey scored once again for his Bulgarian side Ludogorets Razgrad in their league game against Beroe on Sunday evening.

The forward has been in good form since joining the Bulgarian side from German side Schalke 04.

Ludogorets Razgrad defeated Beroe 2-0 and it was the Ghanaian who made sure of the results as he scored late to seal the win.

Bernard Tekpetey came on as a second half substitute for teammate Mavis Tchibota who scored the opening goal for Ludogorets in the 33rd minute of the first half before making way in the 79th minute of the game.

The home side went into recess with a 1-0 lead but made some changes in the second half with Tekpetey and compatriot Elvis Manu all coming on in  the second half of the game.

Ludogorets are currently on top of the Bulgarian top tier league with 30points after eleven games..