Best African Footballers To Ever Play In The Premier League 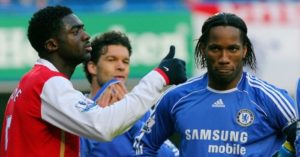 And finally, a player of more recent times who has been one of the most impressive players of African descent is that of Mo Salah who has been a revelation since he joined Liverpool and went on to become one of their most prolific scorers in history on the way to their first Premier League title. His strike rate is so impressive, and not beaten by many, with him scoring 95 Premier League goals in 154 appearances which is just outrageous.