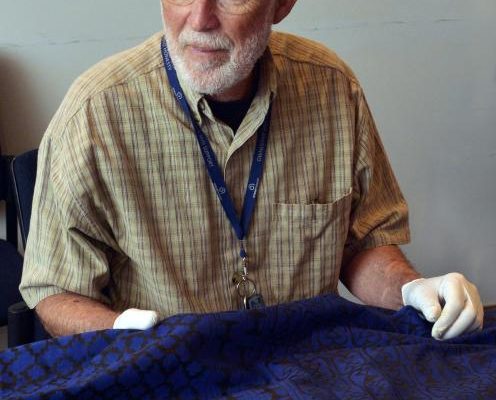 An American sociologist Leo Barrington has given 10 West African textiles to the Otago Museum in New Zealand, including a large cloth worn for ceremonial occasions in Ghana.

Otago Museum African material honorary curator Joel Vanderburg, is a USborn biologist and former public health adviser who has lived in Karitane for more than 20 years.

He worked with Dr Barrington, a medical sociologist, in Ghana for the World Health Organisation on aspects of parasite control, in the early to mid1970s.

They have remained close friends for more than four decades.

After a recent visit to see Mr Vanderburg in Dunedin, and to visit the museum’s Africa collection, Dr Barrington returned home to Portland, Maine, in the United States, and decided to offer his personal collection of West African textiles to the museum.

Dr Barrrington and his late wife, Liz, lived and worked in Nigeria and Ghana in the 1960s and ’70s.

Their appreciation of West African cultures was evident in the textiles they were passing on to the museum, Ms White said.

The big adinkra cloth, with which Mr Vanderburg was photographed, would have been worn by an Ashanti man from south central Ghana at a funeral or other ceremonial occasion.

Adinkra cloth is stamped and patterned with traditional Ashanti symbols.

Among the gifts is a traditional smock that would have been worn by an adult Hausa man from northern Nigeria.

It includes tailored handwoven strips of cotton cloth and embroidery at the neckline.

Two other cloths from northern Nigeria have multicoloured decoration.

Six lengths of multipurpose handwoven cotton cloth, also from northern Nigeria, would have been used as coverings, blankets or perhaps even on the floor at times, museum officials said.