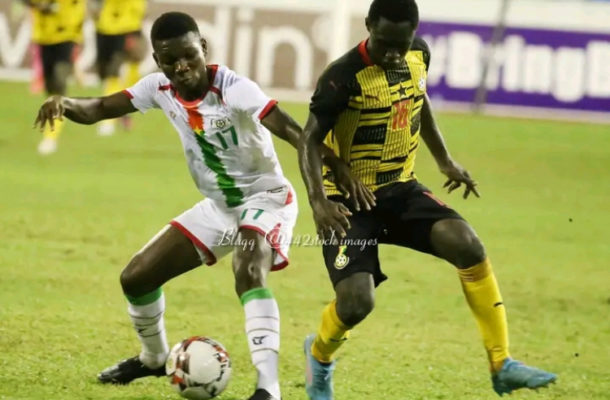 The Black Starlets were handed a 1-0 defeat at the hands of Burkina Faso at the Cape Coast Stadium in the semi finals of the WAFU Zone BU-17 Championship.

Ghana will therefore miss out at a place at the 2022 CAF U-17 Africa Cup of Nations.

Burkina Faso started the game on the front foot as they dominated Ghana for the opening minutes of the game as they took the initiative.

Black Starlets Pius Adua made appeals for a penalty after falling in the box but the Togolese referee waved away the appeals.

There were chances between the two sides but none of them could make it count as the first half ended goalless.

After the recess it was a more open game as both teams searched for the opener but both defenses stood tall.

Ghana nearly broke the deadlock on the hour mark as Andrew's Appiah sent a pile driver goal wards but was tipped wide.

The Burkinabe's were awarded a penalty kick  in the 63rd minute after Aboubakar Camara was upended in the box by Collins Agyemang.

Ousmane Camara expertly converted the penalty to hand his side a 1-0 lead his fourth of the tournament.

Ghana had a free kick in the 67th minute which was effected by Abdul Rashid Adam but it went wide of the post by a whisker.

It was all Ghana as they sent men forward for the equalizer but the Black Starlets huffed and puffed in vain as Ghana failed to find the equalizer after four minutes of added on time.

In the latter stages of the game, Ghana appealed for a penalty after Andrews Appiah went down in the box theatrically but the referee waved away the appeals as the attacker got up and continued play

It ended 1-0 for Burkina Faso after full time. They will face Nigeria in the final.

Tim 1 week ago
Why???? First U20 and now U17. Something is wrong. At least thank God for the away goals rule for knocking out Nigeria if not we would all have been doomed. cos over two legs we could not win. GFA should wake up