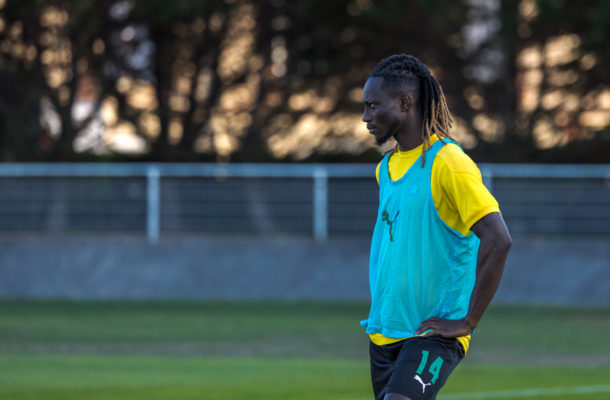 Left back Gideon is aiming to make an impact during this International window. The 24-year old who plays for French side Auxerre has established himself in the Black Stars since he made his debut in the 2021 Africa Cup of Nations qualifier against South Africa at the Cape Coast stadium.

Gideon made the headlines when Ghana played against Nigeria in the World Cup play offs in March this year. The former Red Bull Salzburg and Bordeaux left back has been speaking with us ahead of the International friendlies against Brazil and Nicaragua. Read on for the full transcript:

On training so far and new players

Its been good so far, we have been here for three days now and looking at how the training is going I think we are fully ready and the new boys in the team have been very satisfying so I think are ready.

On playing against Brazil

Playing against a country like Brazil is a good test for Ghana, going to the World Cup it’s a good choice for Ghana. I give thumbs up to the GFA for giving us this opportunity to play against a team like Brazil.

On being ready for the task ahead

Being ready means, we are going to compete against the best countries in the World Cup so playing against Brazil on Friday is going to be a good test for us so for sure we are fired up.

This game will show if we are ready or we are getting close to our goals at the World Cup.

On being battle ready

The impact with everyone on the field has been very satisfying so we being hungry and also showing that we are ready to battle any country that comes our way shows something that is very good for us.

I am not going to say much to Ghanaians, they know that we have a very big tournament ahead of us and they know that playing against Brazil is a big game for us and Ghana as a country so we are going to tell them to continue supporting us and give us the hope that we need and we believe that we are going to come up with something nice for them.