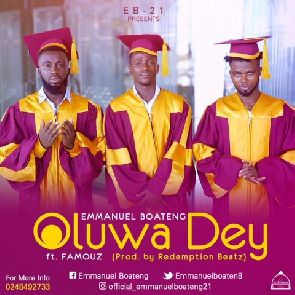 The Levante star would be joining the likes of Black Stars captain Asamoah Gyan as Ghanaian players who are engaged in music whilst also playing football.

The 22-year-old revealed his love for singing started since his childhood.

The single will feature Famouz, (Vincent Adom Baffour and Umar Alidu) a duo whose hit "Nufuo no" enjoyed massive radio airplay in Ghana.

According to the budding talent “ it is always important to remember where you started life from. The difficulties, the struggle, the challenges and how far God has brought you, the devil won’t succeed with his plans when the blessings of God is upon ones life.”

Boateng also known as "Barca Slayer" had an impressive first season in Spain, where he scored 6 La Liga goals, three against Barcelona to end the champion’s unbeaten run.

He also scored another against European Champions Real Madrid.

The former U-17 (Black Starlets forward earned his debut call-up to Ghana’s Senior National team (Black Stars) last month ahead of their friendlies against Iceland and Japan.

The Single Titled "Oluwa Dey" is Produced By "@RedemptionBeatz" and will be out tomorrow.