Bobi Wine accuses police of pulling down his posters 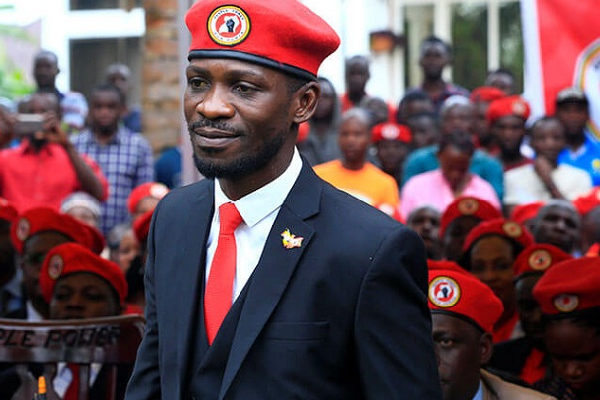 The National Unity Platform (NUP) party has accused police of pulling down campaign posters of presidential aspirant Robert Kyagulanyi, alias Bobi Wine, in some places and supervising the hanging up of those of President Museveni.

Mr David Lewis Rubongoya, the NUP secretary-general, yesterday asked the Electoral Commission to take action against the alleged police vandalism and involvement in partisan politics contrary to the Constitution.

“EC is supposed to be an independent body. So we ask them to come and tell us why police continue to do all these things during an electoral process. We need an explanation on all these incidents,” Mr Rubongoya told journalists yesterday.

He made the remarks as NUP leadership launched the campaign poster of their party presidential flag bearer, Mr Kyagulanyi, in Kampala.

Last week, NUP presented pictures of police supervising the hanging up of Mr Museveni’s posters in Kireka, Wakiso District, while other pictures showed the Force dismantling posters of Bobi Wine and throwing them on a pickup truck to take them away.

“The same Uganda Police Force, which guards NRM agents installing Museveni’s posters, pulls down my posters and banners without quoting any section of the law. And if truly people love President Museveni like he has always claimed, then why use police to guard those showing support for the most loved man in the land?” Bobi Wine stated in one of his social media posts.

In response to the accusations yesterday, police spokesperson Fred Enanga said they had done that only once at Mini Price in the city centre to quell a looming brawl between NUP and NRM supporters.

“We only picked the posters because these people were going to fight and that was once. If anyone has any new picture or video they should present it before me so that I can follow it up,” Mr Enanga said by telephone.

Mr Paul Bukenya, the EC spokesperson, said they were following up the matter with police.

“We have said these elections will be supported by posters, fliers and banners, among other media platforms. If police and security are removing them, then that is wrong. We need to engage them and all other stakeholders on what and how to use the posters,” he said.

“We also advise the candidates to seek permission from the owners of buildings [where they hang their posters] and avoid pinning posters in the middle of the road. When these regulations are not adhered to, police may swing into action,” Mr Bukenya added.

In previous elections, security personnel have pulled down campaign posters of Mr Museveni’s rivals, especially Dr Kizza Besigye. In one incident, all his posters in towns on the Kampala-Gulu highway were pulled down. Dr Besigye complained to the EC every time but received no help.