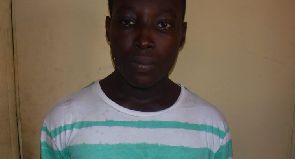 An 18-year-old suspected robber has been arrested by the Community 2 District Police for allegedly robbing of a 50-year-old woman at Community 5, Tema of her money and valuables.

Edem Atakpa, an unemployed, who resides at Community 1, Tema, reportedly broke into the car of the woman at her residence and stole a handbag containing various items and cash of GH?5,000.

According to reports, the suspect was recently discharged by a court in Tema after he allegedly broke into car to steal.

When he was arraigned before court, the complainant abandoned the case.

Deputy Superintendent of Police (DSP) Osman Alhassan, the Crime Officer of the Community 2 District Police, who confirmed to the story to DAILY GUIDE, explained that the incident occurred on October 7, 2016 at about 8:45 pm barely a month after he was discharged by the court.

According to crime officer, the suspect managed to steal her handbag when the woman alighted from the car and tried to call her children through the other gate.

The police officer pointed out that when the complainant was about to park the car in her garage, she detected that her brown lady’s bag containing the aforementioned items had been stolen.

DSP Osman explained that she saw the suspect running towards a secluded area and immediately raised an alarm which attracted neighbours who pursued the suspect and arrested him.

He stated that the suspect was handed over to the Police patrol team, adding that the woman travelled to the Community 2 District Police to lodge a complaint.

The police officer noted that the suspect admitted the offence during interrogation but said he handed over the bag containing exhibits to his accomplice called Koo Mfanti.

The suspect, however, failed to lead the police to the said accomplice, who is at large. He has been charged with robbery, according to DSP Osman.